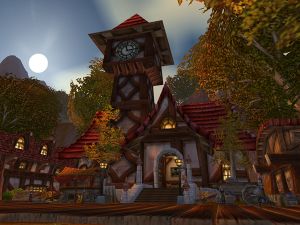 The Lakeshire Town Hall in the Redridge Mountains is an old building that has been diligently refurbished several times. The town hall is commonly the seat of rule by the local magistrate, and the current magistrate, Solomon, is a kind and wise ruler. The town's problems with gnolls and Blackrock orcs has put him in a state of desperation, however, and he readily accepts aid from helpful adventurers.

Throughout most of the Redridge storyline, many Redridge Citizens stand in line to request an audience with Solomon, demanding answers for the recent disappearances. After

[20] Triumphant Return, the concerned citizens are no longer there, their concerns having been addressed with the freeing of the Kidnapped Redridge Citizens.