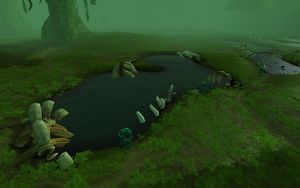 The Lakkari Tar Pits are, as the name implies, tar pits found in northern Un'Goro Crater, just below Marshal's Refuge. Flowers, Tarblossoms grow at the bottom of these pits, which have gone unnoticed for a long time. Tar beasts live in the area among several giant bones of creatures that got stuck here.

In the north central area of Un'Goro, in the area of sparsest tree cover, lie these curious lakes of black tar. Creatures that venture too close get stuck and perish in the dark depths. The bones of perhaps thousands of reptiles and other beasts lie strewn about the place, some of them ancient.[1]