Lakota Windsong is a tauren quest giver located at Darkcloud Pinnacle in Thousand Needles. She was once captured by Arnak Grimtotem who killed her brother and wanted to marry her. She was later freed by adventurers. 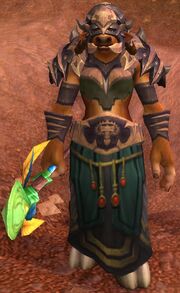 Lakota at the Twilight Bulwark.

She may be related to Thersa Windsong.