For other uses, see Lament of the Highborne (disambiguation). 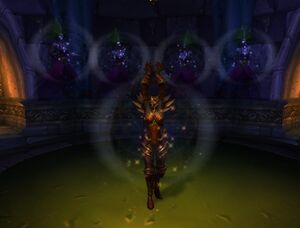 Sylvanas and her banshee choir performing the lament.

[Lament of the Highborne] is a small book that contains the Thalassian song of the same name. The lament was composed by Derek Duke and Russell Brower and sung by artist Vangie Gunn. It appears on the Burning Crusade soundtrack. The book serves no gameplay purpose, other than to offer the player a chance to reread the lyrics as many times as they wish. The composers revealed that "the quest design team enhanced a new quest line to incorporate the song as a payoff moment".

[The Lady's Necklace], a gift from her sister Alleria) at Windrunner Spire in the Ghostlands and returning it to the Dark Lady. The Lament of the Highborne song and event were originally absent from the beta phase of The Burning Crusade — however, before release, the event was added to the quest, along with the lyrics to the song. The haunting melody can also be heard as the Burning Crusade credits music, and variations on the lament play in the Eversong Woods, certain areas of the Ghostlands and the Isle of Quel'Danas.

As denoted by the term "Highborne", the Lament of the Highborne is an ancient song that dates back over 10,000 years. It was a lament to fallen night elves and a tribute to those whose bravery remained steadfast against overwhelming odds. While the melody hasn't changed, the words of the song were altered about 2,800 years ago to reflect the losses the night elves' high elven descendants suffered during the Troll Wars. Finally, during the Third War, the song was used again to illustrate the elves' grief during the Scourge invasion of Quel'Thalas. Sylvanas Windrunner, who died defending Quel'Thalas from the Scourge and thus failed to protect her people, still grieves at this failure, if her claims are to be believed.[1]

This video, published by Blizzard on September 19, 2007, shows the assault of the Scourge on Quel'Thalas and the assassination of Sylvanas and her afterdeath rising by Arthas along with Sylvanas singing the song, which is the part players can watch as well for themselves while playing the game.

Although not official, Patty Mattson, the voice actor for Sylvanas, decided to make a new version of the Lament of the Highborne with a few changes, due to requests and a Twitter petition posted by fans of Warcraft.[2]

A fan-made video of the song, Lament of the Highborne.[3] 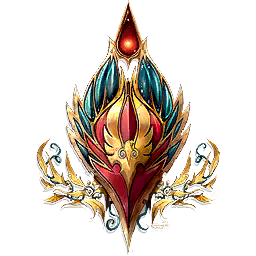 The Icon of Blood found on the cover of the book.