From Wowpedia
(Redirected from Lana'thel)
Jump to: navigation, search

"Lana'thel shed tears for the lives of the elven kin she expected to lose during their war march to Northrend. She had no idea at the time that she would be the cause of many more."[2]

Blood-Queen Lana'thel, pronounced (LEH-nuh-THEL),[3] is the leader of the San'layn, a group of Kael'thas' greatest followers, raised in undeath by the Lich King and transformed into vampiric beings.[4]

Much of Lana'thel's life is unknown but what is known is that she was friends with Thalorien Dawnseeker and she lived in relative peace until the Scourge came to Quel'Thalas. Following the destruction of Quel'Thalas, Prince Kael'thas Sunstrider returned from Dalaran and renamed his people the blood elves in honor of their murdered kin. As the blood elves began regroup and rebuild, a battle-hardened Lana'thel stumbled upon Quel'Delar, the sword once wielded by her friend Thalorien.

After Kael'thas promoted Lor'themar Theron to Regent Lord of Quel'Thalas and ordered him to safeguard their people, he took a force of blood elves with him to aid the Alliance against the Scourge forces in Lordaeron. Lana'thel would be one of the countless blood elves under his command as a series of events led them to Outland, making Illidan Stormrage its new ruler, and then being sent to Icecrown to destroy the Lich King. Lana'thel readily followed her prince throughout all these dangerous adventures and was eager for revenge against the Scourge.

However, in the icy hills of Northrend, Arthas ultimately defeated Illidan and Kael'thas, and the expedition's few survivors were scattered across the frozen wastes. One by one the Lich King sought out those who had challenged him, and Lana'thel found herself cornered. Using Quel'Delar, she struck at him with all her might, but Frostmourne's evil powers overwhelmed her. Through his blade, the Lich King chose Lana'thel to serve him in undeath as blood-queen of the San'layn, a group responsible for overseeing the Scourge's operations across Azeroth.

Blood-Queen Lana'thel eagerly carried out her new duties, but every time she looked at her blade, maddening anger would swell within her as she remembered her former mortal life. She could not afford such distractions, and with a scream that echoed throughout Icecrown, she shattered Quel'Delar and flung the fractured pieces as far as she could.[5] 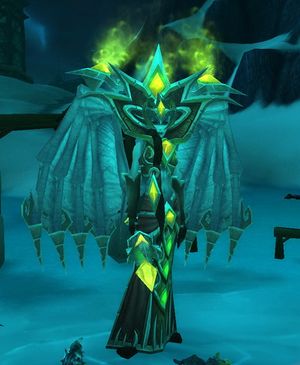 Lana'thel now makes her home in the Crimson Hall of Icecrown Citadel. She is protected by Keleseth, Taldaram, and Valanar, who were revived by the Lich King after they were defeated in Utgarde Keep, Ahn'kahet, and Naxxanar (respectively).

Lana'thel makes an appearance at Quel'Delar's Rest, just south of the Argent Tournament Grounds in Icecrown, giving background information on the epic sword.

In these halls she met her ultimate demise.[7]