"There are rumors - some sinister, some benign - that Landro's influence extends beyond the arena of gambling."

Landro Longshot is a friendly level 60 TCG item redeemer located in Booty Bay in the contested territory of Cape of Stranglethorn.

By entering codes gotten off rare, epic, or ultra-epic special cards in the Trading Card Game, one can earn one of the following items:

It is listed as a known issue in the game that talking to Landro will spawn Booty Bay Bruisers, thus making it difficult for those hostile or hated with Booty Bay to redeem codes from WoW TCG trading cards.[1]

Welcome, <name>. I am Landro Longshot - manager of the Black Flame. Perhaps you've not heard of the Black Flame until now. That doesn't surprise me; we work to keep things that way. We prefer to avoid... factional entanglements.

The Black Flame specializes in providing the finest services and entertainment money can buy, whether they happen to be hard to find items, gladiatorial combat, or lucrative games of chance.

Are you here seeking something specific?

What promotions do you have?

Ah - oddities and rarities. We specialize in Azeroth's more unique items for the discerning adventurer.

Since you're speaking with me, you must already have an idea of what you're looking for. 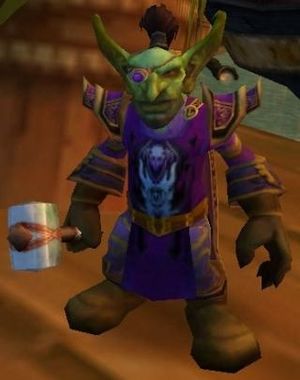 Landro is also a playable card in the TCG. He is used to turn extra resources in to card draws. The Landro card is one of the few cards in the WoW TCG that relies on a coin flip or a dice roll.[2] 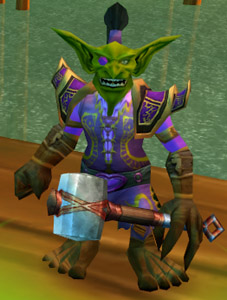