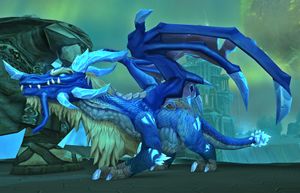 Lanigosa in her dragon form.

Lanigosa is a blue dragon in high elven form located in Dragonblight during the third invasion of the Burning Legion.

She assisted the paladin Galford and informed him about Tyr. She was later approached by the Highlord of the Silver Hand, who was looking for Galford. She directed him to Galakrond's Rest. She then flew to Path of the Titans where Jotun was located and assisted the Highlord in the battle against Tyr's former ally. After Jotun came to his senses, the Highlord took the Spark of Tyr and Lanigosa took the adventurer to Dalaran and promised to return to Dragonblight to collect Galford's body.[1]