Lantresor of the Blade (alternate universe)

For the character from the main universe, see Lantresor of the Blade.

Lantresor of the Blade is a level 99 quest giver found at Hallvalor in Nagrand. He can also be obtained as a follower for your Garrison upon completing his questline.

Lantresor is described as a young blademaster that has been exiled from the Burning Blade clan years ago. Shortly after the formation of the Iron Horde he returned to challenge the leadership of the clan but was imprisoned. After killing Instructor Luhk and getting his blade and banner, he entered The Masters' Cavern. After the adventurer killed Packleader Dran'ruk, Gorn and Sesk, the warlord Warlord Dharl of the Thrice-Bloodied Blade entered the fight and Lantresor helped to kill him. After he was killed, Azuka Bladefury became the new warlord and banished Lantresor from the clan. He dropped his banner and left the cave saying that the clan is not worthy of him.

He was so impressed with the adventurer, that he asked to fight by their side[1] becoming a follower of the commander. 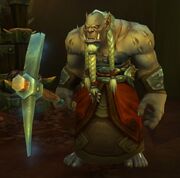 Lantresor in the future Gorgrond. 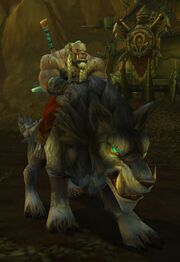 Thirty years later, Lantresor is among the remaining Mag'har who oppose the Lightbound. When a full-scale assault is launched on Hellsreach Citadel, Grommash Hellscream and Lantresor buy the others time to escape Draenor. Although his death is not seen, it is unlikely he survived the encounter.

I miss the grassy plains of Nagrand.