For the NPC, see Larion (dwarf). 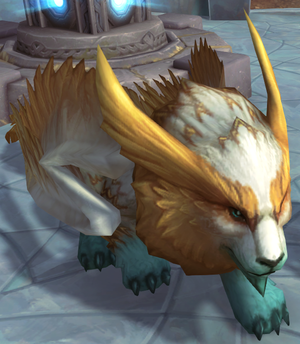 Larions are mighty lion-like creatures native to the Shadowlands. They are highly territorial, and alphas will vie to become dominant over one of Bastion's many hills, fending off all who tread near. Far deadlier foes than lions, their wings allow them to chase prey with unparalleled precision, and their massive claws and teeth take care of the rest. Long ago, kyrian aspirants trained against these creatures, before the advent of the centurions. While effective, it is not recommended to attempt to stop a larion mid-attack, as it would most likely result in death. Should one encounter a larion, it is suggested they appreciate it from a safe distance.[1]

They can get destructive if they don't get proper things to chew on.[2]