"All but a handful of us know what we fled on Argus. We remember it. We remember what Kil'jaeden did, what happened to our people. We would — we will — happily die to preserve even a handful of our race uncorrupted."[2]

Larohir lived in Mac'Aree on the eredar homeworld of Argus. An echo of him called Councilor Larohir can still be found at the Circle of Aspirants watching a jed'hin match. He says that one of his men is participating in the match. 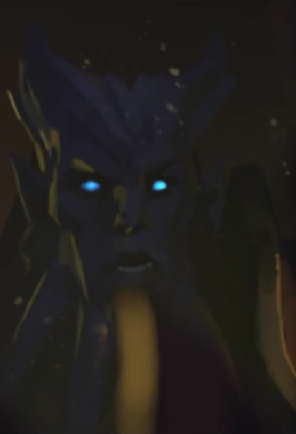 Larohir in Lords of War.

When Velen wanted to completely abandon Shattrath City, last holdout of the draenei, Larohir was the one to convince him otherwise. The exarch knew enough draenei had chosen to stay behind, to be slaughtered in the defense of the city and its people; and if the Orcs (and more importantly Kil'jaeden) weren't convinced they had wiped the draenei out, they would never stop hunting them. Velen reluctantly agreed and left Larohir to lead the defenses during the Siege of Shattrath.[2] Vindicator Nobundo[3] and Vindicator Maraad were among those who volunteered to stay behind under the exarch's command.

Once the demonically-fueled Horde had breached their gates, Larohir ordered Maraad to take the last group of refugees and see them safely out of the city.[1][4] Even as Shattrath burned and crumbled around him, Larohir would not yield its defense. The exarch fought on so others could escape;[5] he is presumed to be dead.

Given his title, he was probably a member of the Council of Exarchs. Of which group he was Exarch is unknown, though he was the leader of the then-unnamed draenei military which became the Vindicators. However his direct predecessor as Velen's lieutenant, Restalaan, was of the Rangari.