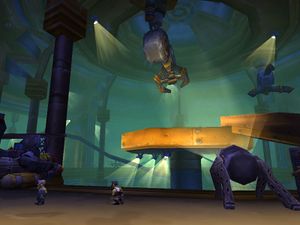 The Launch Bay (sometimes referred to the Hangar) is located within Gnomeregan, and lies beyond the tunnels leading from the Hall of Gears. It has one upper level and one lower level, both of which hold leper gnomes and their mechanical contraptions. The Electrocutioner 6000 can be found on the central platform accessible via a ramp from the west side of the upper level. Several flying machines and bombers are still there.

The Launch Bay upper level has two doorways: the eastern one is the aforementioned tunnel from the Hall of Gears; the southeastern leads down ramps to the lower level, where continuing straight (then left) will lead to the Engineering Labs' upper level, and turning right (northwest) will lead back to the Launch Bay's lower level.

The only other exit from the lower level is a tunnel just west of south containing a horde of Dark Iron dwarves, leading to both the Tinkers' Court and Mekgineer Thermaplugg, and an off-shoot tunnel that enters the west side of the lower level of the Engineering Labs.