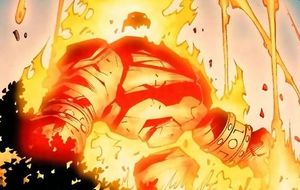 A lava elemental as seen in World of Warcraft: The Comic.

Lava elementals are a conglomerate of both fire and earth elementals. The lava elementals in the game are found in the Burning Steppes, in the Searing Gorge, in Ragefire Chasm and inside Blackrock Mountain.

Many of them are allied with the fire elementals and serve Ragnaros.

This blocky humanoid, its torso formed of fluid black rock, glows with a red inner light. Molten lava oozes from its great fists. Lava elementals are destructive creatures that consume everything they touch with their powerful heat. Some theorize that lava elementals may be related to fire elementals, but the two do not seem to get along. Lava elementals fight for their own territory and refuse to share with their fiery brethren. A lava elemental appears as a floating, vaguely humanoid shape composed of large boulders. These boulders are in truth blobs of molten lava. While the lava elemental trails a few inches of the ground, it cannot rise any higher. A lava elemental stands nearly 15 feet and weighs about 2,000 pounds. Lava elementals enjoy targeting enemies with heavy armor, thus making good use of their impacting blow ability. They use their powerful attacks it their fullest degree and divide their attacks among their enemies, in order to affect as many as possible with their lava sear ability.[1] Lava Elementals speak Terran and Ignan dialects of Kalimag.[2]