Lavanthor is a core hound boss located in Violet Hold. 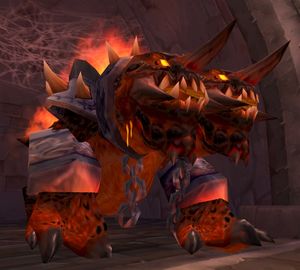 Lavanthor in World of Warcraft.

Cyanigosa in her cold cunning has unleashed the core hound's inferno. The magi imprisoned Lavanthor to stanch the two-headed terror's thirst for blood, and years of isolation have done nothing to improve its temper.

Face him away from the group because of his Flamebreath attack, tank him on the stairs next to his holding cell. When he begins to cast Lava Burn back up a few steps to avoid the AOE damage of it. Easy Tank and spank, just keep stepping backwards on every Lava Burn.

Lavanthor appears as one of the bosses that can be encountered in the Dalaran Heist single-player experience in the Rise of Shadows expansion for Hearthstone.