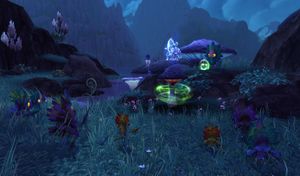 Leaf-Reader Kurri is a podling found at the north end of Gloomshade Grove in northwestern Shadowmoon Valley, holding court over a dozen hostile podling trappers, tenders, nibblers, and spitters with a vision of a sporeling. The Leafreader's corpse holds the

Aggro
Visions! No! You pay for interfering!

To check whether the Podling Leafreader has been looted, copy and paste this command into the chat window:

If a "true" appears in the chat window, the Podling Leafreader has been looted; "false" indicates the opposite.

[Mushroom of Destiny], as well as speaking about "washing in the holy spores" and "feeling the might of mushroom", seemingly foreshadows the podlings' transformation into Outland's sporelings. This is further supported by Jeremy Feasel stating that the sporelings were not always made of mushroom.[1]