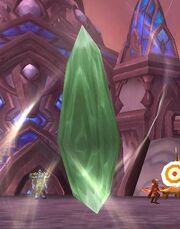 Leafshadow is the green shard of the ata'mal crystal. It was held by Restalaan, long-time friend of Velen and captain of the guard in the city of Telmor in Talador. This crystal cloaked the city, protecting it from ogres and their gronn masters. Durotan and Orgrim learned of its existence during a childhood trip to the city.[1]

It was utilized by Durotan - who remembered the necessary words to lower the shielding illusion - to reveal Telmor to his forces, and the orcs proceeded to sack the city.[2] Once in the Horde's possession it was used against the draenei to hide the orcs' assault on Shattrath City until the last possible second.[3] Its whereabouts after the fall of the city are unknown.

Someone, likely a member of the Sargerei, informed the Shadow Council of Leafshadow and how to deactivate it, allowing a small army led by Vorpil Ribcleaver and Teron'gor to attack the city. Leafshadow was retrieved from a ruined building and brought to Retribution Point, where it was used by Restalaan to cloak the amassing Sunsworn and Auchenai forces from the Shadow Council.