Not to be confused with Leena Guant.

Leena is a draenei shaman. She was a child, apparently three years old (the year before the Dark Portal was opened), when the Orcish Horde was in the middle of their slaughter of the draenei on Draenor.

Leena as a child on Draenor. 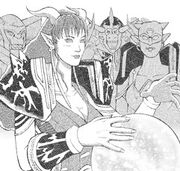 Leena as an adult.

She lost first her father, Alius as he tried to protect Leena and her mother from the approaching orcs, and then her mother who tried to lead the orcs away from Leena but was caught before she could get far. Both were killed by J'argg Bloodfyre.

Leena was about to be killed by J'argg before she was saved by his brother, Jaruk Bloodfyre. Jaruk, who had refused to drink the demonic blood offered to the orcs by agents of the Burning Legion, had enough of the slaughter and could not stand the bloodlust that was corrupting his people. Jaruk attacked his brother and damaged his left eye. The battle was stopped by an ogre lord. Jaruk took Leena and fled into the wilderness. As they were running, Leena needed to pee so she went behind rocks but was bitten by a Cavern Crawler Hatchling and immediately started to burn up. In Zangarmarsh Jaruk found herbs from which he created medicine for her. Soon later, a marsh beast delayed them, allowing J'argg's raid party to catch up, but Jaruk was able to stir a hive of fireflies and a spore walker, which attacked the approaching orcs. With the help of Jaruk's worg mount Fang'gar, which has followed them as well, they were able to escape again. While she was a child, she called him Jork Buffire.

Jaruk took care of Leena as though she were his own daughter, and taught her the ancient ways of the orcs; their language, customs, beliefs, how to track and hunt with a bow. They were always on the run from J'argg and his men, not wanting to unnecessarily endanger the draenei who gave them shelter. She did not remember her parents so her only family was Jaruk. On an anniversary of their first meeting (apparently a few years later), they were staying with an older draenei named Chantu. Jaruk gifted Leena, now noticeably older, with a small cub whom she named Pebbles. That evening, Leena wandered off on her own to hunt boars and was captured by J'argg and his followers. J'argg revealed that he had traveled to the Black Temple to obtain a vial with the Blood of Mannoroth. He forced his brother to drink the blood, and demanded to kill Leena as a proof of his new allegiance. But Jaruk, still in control of his actions, attacked J'argg and his followers. Apparently victorious, he renounced his brother and walked off to embrace Leena. But in a desperate final act, the dying J'argg managed to thrust his blade through Jaruk's back. The shocked Leena picked up a fallen blade and pierced J'argg's neck, killing him.

As Jaruk laid dying, the elements that had previously abandoned the orcs granted him a final vision, allowing him to see a future in which Leena had grown up to be a shaman and worked together with draenei, orcs, tauren and trolls - the latter two Jaruk, for obvious reasons, did not recognize - to restore the balance of the elements. With his dying breaths, he assured Leena that everything would be all right.[1]

Many years later, in the service of the Alliance as a shaman, Leena joined Lunarfall on alternate Draenor as a follower.

She can only be recruited using the Headhunter's Harvest from Lunarfall Inn.

Since the vision of her future showed her working alongside orcs, tauren and trolls, she may become or already is a member of the Earthen Ring.