Leeroy on his way into the Rookery.

Leeroy Jenkins (aka Ben Schulz)[1] is one of the most famous players/characters in World of Warcraft. The video has become a World of Warcraft phenomenon. After much debate and controversy, <PALS FOR LIFE>, Leeroy's guild, have admitted that this was a staged promotional video. They maintain, however, that it is essentially a faithful re-enactment of a true event.

Leeroy's actions have caused the larger World of Warcraft community to use his name to represent any action that could be seen as potentially dangerous and/or incredibly stupid. The Leeroy movie is generally suggested to be a must-see for any and all WoW players. It has become a popular term for a person who causes a bad pull that causes a group wipe. In 2005, Leeroy was also mentioned in a question about World of Warcraft on the TV game show Jeopardy!.

On December 22, 2017, the YouTube channel Anf Pal released the first take of the famous video in the hopes of raising awareness about net neutrality, stating in the YouTube video's description that "I've been holding onto this for over a decade waiting for the "right" moment to make it public, and then last week Ajit Pai created his awful/condescending video and it riled me up so much that I decided it was finally time to unleash this gem of Internet history on the world to do my part to help out."[3] The original video was also reuploaded along with the first take video.[4]

The video depicts an Upper Blackrock Spire raid group carefully planning out over Ventrilo a method for clearing out the Rookery. The scene is the epitome of highly structured raid play, where order of battle, combat tactics, and numbers crunching are par for the course. Among the group is Leeroy jenkins, sitting AFK and saying nothing while the rest of his extremely cautious group discuss tactics on how to safely defeat a boss in Upper Blackrock Spire (to the point of calculating a 32.3333% (repeating, of course) chance of survival). After a full minute into planning, before his party is properly prepared, however, Leeroy suddenly returns to his computer saying, "All right chums, time's up, let's do this...", then screams his signature line, "LEEROOOOOOOOOOOOOOOOOOOOOOY JEEEEEEENKIIIIIIIIIIIIIIINS!!!!" and he charges blindly — solo, no less — into the battlezone.

The other party members stand still for a moment confused, perhaps in shock, and then run after Leeroy with haste, yelling, "STICK TO THE PLAN! STICK TO THE PLAN!!" to complete their original goal and to "rescue" the helpless crusader. Meanwhile, Leeroy has proceeded to aggro nearly every creature in the chamber, while the party is quickly overwhelmed and unable to coordinate. At this point, the party wipes (all members die), and when someone asks for a

[Soulstone], they learn that no one brought one because no one in the raid was a Warlock.

The movie concludes with the words "At least I have chicken", which has become a secondary catch-phrase. Schulz has said that KFC is the guild's favorite snack, and that while Leeroy was AFK, he had gone to reheat some leftover chicken in the microwave. Schulz states that he was kicked out of the guild for about five minutes until they let him back in after the incident. He also stated that they used a soulstone after the event to rez everyone.

Many people point to the video as THE premiere example of how the game can become far too serious, sapping the fun from the experience. Others would say that it shows how only teamwork and careful planning can lead to success when confronting high-end game content. Either way, the video is popular and fun. (And on a side note, Leeroy is still part of the same clan today — guess they didn't take it too hard...)

Leeroy Jenkins is also featured in the World of Warcraft Trading Card Game as an epic ally card, number 198.

Metzen was asked at the San Diego Comic-Con if the character will ever appear in World of Warcraft: The Comic. He thought it was a good idea. Only time will tell if it ever happens.

The original player behind Leeroy Jenkins was invited for a guest appearance during BlizzCon 2007. On stage, he recited the war cry of "LEEEEEERRROYYYYY JENKKKIIINNNSS" to the delight of the audience. He was said to be available at the after-party to meet and greet fans. 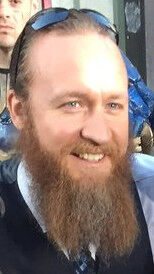 Leeroy Jenkins' actual name is Ben Schulz,[1] of Colorado, and he has been playing since open beta.[5] He is a repair technician for industrial lighting. Although offered by EA to be a game tester after the Leeroy event, he turned it down. He came up with the name Leeroy Jenkins after a catchphrase/yell while playing StarCraft with some friends.[6] Unsurprisingly, Schulz is often called upon to reproduce his famous yell.[7]

Setup in the video

Another perspective on the movie

The movie was staged, and to some, an obvious joke. Even before a <PALS FOR LIFE> member was interviewed on a gaming news network and stated that it was a reenactment of a previous event, people pointed out the various indicators for a staged event, including the following:

In patch 3.0.2, there is an achievement called

[Leeeeeeeeeeeeeroy!] To obtain it, the player has to kill 50 whelps in the Upper Blackrock Spire's Rookery, the same place where Leeroy and his guild wiped in the video, in under 15 seconds. Getting this achievement awards the player with the title <player> Jenkins.

Cheering for the whiter one

Leeroy's player stepped into controversy when he stated at BlizzCon 2007 that he would be cheering the "white" team in Starcraft tournaments, as in Caucasian. He explained, however, that "it came out wrong but like I've tried explaining that before but until America televises video gaming to that extent and we have people that are that hyped about it... [we] are not going to produce [the] kind of players that Korea is producing right now. They are superstars. They play against the best and people strive to do that much harder than they do here. So in that, generally, Koreans kick the shit out of the white dudes. And that's what that was about. I was just doing that to root for the underdog".

The full dialog of the original video is difficult to reconstruct based on the material. As a consequence of this individual transcripts may vary heavily. Once <PALS FOR LIFE> discovered attempts of writing a transcript on Wikipedia, they got together and entered their own version at the Leeroy Jenkins Wikipedia entry. Although the dialogue portion was eventually removed, it is retrieveable from page history, and is now presented here.

The finalized description on Wikipedia explains that "PALS FOR LIFE have now released as close to an 'official' transcript as is likely to be seen. Since there was no script the P4Ls have tried their hand at remembering who said what. Some of the audio is too bad to hear clearly, even for the P4Ls."

The video was recorded from Anfrony's POV, and has no spoken lines. Basphemy is nicknamed "Bas" for short.

Jamaal: [talking to teammates outside the Rookery] OK guys, these eggs have given us a lot of trouble in the past, uh does anybody need anything off this guy or can we bypass him?

Ritter: Uhh, I think Leeroy needs something from this guy.

Jamaal: Oh, does he need those Devout Shoulders? Doesn't - isn't he a paladin?

Ritter: Yeah, but that will help him heal better, he'll have more mana.

Jamaal: [sighs] Christ. OK, uhh well what we'll do, I'll run in first, gather up all the eggs, we can kinda just, ya know blast them all down with AOE. Um, I will use Intimidating Shout, to kinda scatter 'em, so we don't have to fight a whole bunch of them at once. Uhh, when my Shouts are done, I'll need Anfrony to come in and drop his Shout too, uh so we can keep them scattered and not have to fight too many. Um, when his is done, Bas of course will need to run in and do the same thing. We're gonna need Divine Intervention on our mages, uhh so they can AE, uh so we can of course get them down fast, cause we're bringing all these guys, I mean, we'll be in trouble if we don't take them down quick. Uhh I think this is a pretty good plan, we should be able to pull it off this time. Uhh, what do you think Abduhl? Can you give me a number crunch real quick?

Jamaal: Stick to the plan!

Therien: It's saying I can't cast! I can't move, am I lagging, guys?

Forekin: What the—what the hell?

Forekin: I don't think you can cast with that s**t on!

Abduhl: Leeroy, you moron! [various other put-downs of Leeroy amongst group]

Jamaal: Listen, this is ridiculous.

Abduhl: This is the (drowned out)th time we've died on this, God!

Jamaal: Why do you do this s**t, Leeroy?

Jamaal: We do have a Soulstone up, don't we? [everyone dies] Think I need a Soulstone?

Abduhl: Yeah but I don't think we brought a Warlock.

Abduhl: Leeroy, you are just stupid as hell. 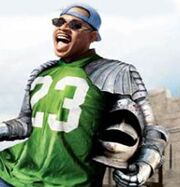 This event has even gone on to garner attention from Blizzard and Upper Deck Entertainment. The mock-website YTMND has a vast collection of pages involving Leeroy-jokes. Also, the World of Warcraft Trading Card Game features a Leeroy Jenkins trading card. 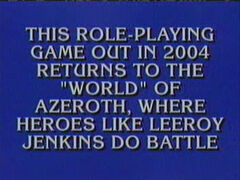 The Leeroy Jenkins (or just Leeroy for short) is a specific type of Noob who has no patience for complicated plans, preferring to charge full-tilt into the fray and start attacking whatever's in front of him. Since this is a semi-viable strategy some of the time (depending on what game you're playing and the difficulty of the opposition), a Leeroy can remain undetected until the team hits the first real challenge, whereupon he gets everyone killed. Any attempts to point out that he had totally ignored the plan will be met with words to the effect of "plans are stupid". And he will never retreat.