Legacy of the Masters (Part 1) 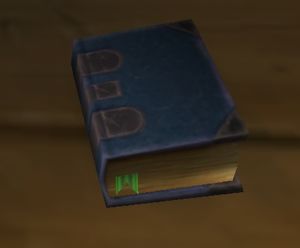 Legacy of the Masters (Part 1) is a book found near the warlock trainers in Orgrimmar, Undercity and Stormwind.

Legacy of the Masters (Part 1)

Read, pupil, and know that I am called Jubeka Shadowbreaker, and it is my duty to share some of the wisdom of our order with those who have the skill to read this document.

After the fall of Deathwing, it was clear that the sorcery of the warlocks was sorely lacking in bite when compared to the threats facing Azeroth. So our council of six warlocks gathered to discuss how best to investigate the new magics witnessed by these threats.

At first, the six of us refused to cooperate, tossing blame and bickering as easily as shadowbolts and curses. Finally, after several nights, the human Kanrethad spoke out:

"In the wake of the Cataclysm, the rising tensions between the Horde and Alliance have driven the greatest heroes of Azeroth to train for war. Warriors have readied their war banners, the Death Knights of Acherus have learned to control the undead and it is even said the Mages are researching ways to undo time itself."

" The relentless darkness which bathed Azeroth has been pushed back. Cho'gall is slain and the remnants of the Twilight's Hammer cult have been scattered. Ragnaros is defeated and his armies forced back into the Firelands. Deathwing lies torn apart and his twilight drakes obliterated. However, the powers they commanded are not so easily forgotten... powers untapped and ripe for the taking."

"In fact, among us now stands several who have faced their power firsthand," he said, pointing at a hooded figure across the room. A deep, sinister laugh echoed from the hood as it burst into flames and burned away to reveal the orc enchanter, Ritssyn.

"It is true, pink skin, I was there when the Firelord was vanquished. The intensity of his flame was unlike anything you can imagine." the burning glow of Ritssyn's eyes cast eerie shadows over his burn-scarred face and thick-tusked grin.

"Untrue," spat a sharp, feminine voice. Shinfel, a Blood Elf adorned with sharp spikes of twilight elementium, glared across the table, "Until you've been a prisoner within your own mind, you know nothing of horror." Shinfel's blood had been corrupted during the fight with Cho'gall and her arms were now covered in black marks left behind by the corruption that had erupted from her skin. The experience had only served to increase the intensity of her sadism.

Shinfel continued, "Even the Firelord's flames were overshadowed by the raw chaos unleashed by the Destroyer." She paused a moment and glanced to the worgen who remained eerily silent. Zinnin had been present when Deathwing was unmade and had not spoken a word since. Zinnin's eyes narrowed for a moment, then snarled at Ritssyn.

Kanrethad stood up from the table and took a deep breath. "This is exactly why we are here. I have no love for any of you, but we each bore witness to pieces of even greater power. Imagine - if we fused the molten fury of the Firelands with the unstoppable chaos of Deathwing. Even the powers of the burning legion could not hold a candle to our flames!"

Ritssyn kicked his boots upon the table and snickered, "And just who would do this? You?" he spat. "I think not. You haven't been seen in battle since the siege of the Black Temple. If it weren't for having shared the secrets of Illidan's transformation with this council, I would kill you just for having the audacity of summoning me."

Kanrethad's lips pursed for a moment, but he relaxed and continued. "No. The scope of this task exceeds the capabilities of any single member here. I propose this council split into pairs. Ritssyn and Zinnin would lead a group into Sulfuras. Similarly, Shinfel and Zelifrax would hunt down the remaining members of the Twilight's Hammer cult and ... persuade them to share what they learned."

Kanrethad continued, "Then we return... one year from now and take the results of our expeditions back to our own sects, more powerful than we would have been alone."

Ritssyn frowned as he saw the greed drawn out in the human's words dance across the council's faces. "And what would keep us from simply killing our partner in their sleep once it was a success?"

Kanrethad's brow furrowed and he growled, "Which is why we swear that if any member of this council breaks the contract and fails to return or returns alone, the others shall strike them down and banish their soul forever. We either succeed together or die alone."

Ritssyn was a powerful warlock, and could probably defeat Kanrethad by himself. But against all five of us? We all saw his hesitation. We all let our hands drift toward our scrolls and weapons.

"Fine," Ritssyn reluctantly agreed. "I can play along with your fool's errand, but first I must know, where will you and that miserable forsaken, Jubeka, be going?"

"Me?" spoke Kanrethad with a wicked grin. "Why I'm returning... to Outland."

The item is a quest reward from