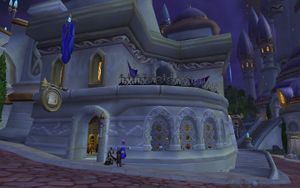 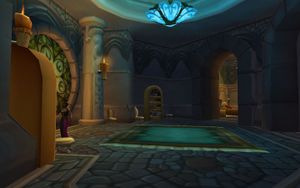 The Legerdemain Lounge is an inn and tavern located in the northern quarter of Runeweaver Square in Dalaran, with entrances facing both the Magus Commerce Exchange and Sunreaver's Sanctuary. The lounge consists of two floors, and a balcony overlooking the northern area of the city. It is staffed by Amisi Azuregaze as Innkeeper on the lower floor, Afsaneh Asrar, the assistant innkeeper on the upper floor, Arille Azuregaze and Mel Lynchen tending the bar, and Sandra Bartan as barmaid.

During the search for Akaari Shadowgore, the Uncrowned led by Valeera Sanguinar briefly secured the tavern.[1] It was also the place where Agent Jones and Agent Smith came to kill Amber Kearnen.[2]