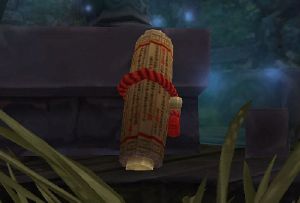 on the northeastern side of Dawnseeker Promontory on the west coast of the Isle of Thunder. Interacting with the lore object is one of the requirements of the Pandaria exploration achievement

Young Lei Shen was born the son of a warlord in the terrible Age of a Hundred Kings. Like his brothers, he was strong of arm and fluent in the ways of war. But unlike others of his generation, he spoke of more than conquest. The legends of his forefathers were etched into his heart.

Once Lei Shen had come of age and commanded his own legions, he announced his intent to awaken the gods. Only his most loyal of followers accompanied him to where no mogu had dared tread: into the very heart of the Thundering Mountain, the sacred home of the one the mogu had called their master.

Lei Shen descended into the mountain.

But it was the Thunder King who returned.