From Wowpedia
(Redirected from Leonid Barthalomew the Revered)
Jump to: navigation, search

Leonid Barthalomew the Revered is an undead member of the Argent Crusade revered by his colleagues for the sacrifices he has made. He investigated the return of the powerful lich, Ras Frostwhisper, in the Eastern Plaguelands. Barthalomew looks at his undeath as a malady, an illness that merely requires treatment. However, he also considers it a great blessing for the Argent Dawn, believing that, as an undead, he is a great vessel to smite the abominations of the Scourge.[1]

Leonid was a noble paladin[citation needed]  until he was killed and later resurrected by the Lich King as a mindless undead. He was present at Stratholme when Ras Frostwhisper pledged himself to Arthas and was transformed into a lich.[2] He was freed by the Banshee Queen Sylvanas Windrunner, but has been loyal to the cause of the Argent Dawn.[3] 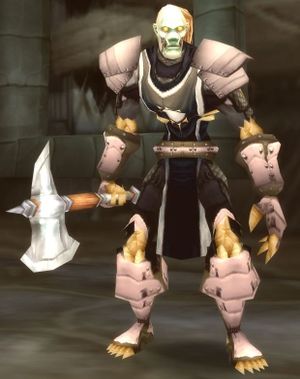 Barthalomew, with the Argent Dawn

Leonid appeared in Light's Hope Chapel in the Eastern Plaguelands as a member of the Argent Dawn. He helped the adventurers of the Alliance and Horde to deal with Ras Frostwhisper.[2]

Barthalomew appeared leading the Argent Dawn at the Battle for Light's Hope Chapel before the arrival of Tirion Fordring.[4]

As part of the Argent Crusade, Leonid sent adventurers to help the Brotherhood of the Light.[5]

Still plagued with the "malady" of undeath, Leonid's studies on Azeroth and Northrend met with little luck, and all of his leads ran dry. He thus traveled to Draenor in the hope of finding something, where he could be found in the Lunarfall Inn or Frostwall Tavern. His first pilgrimage was to Auchindoun, a house where souls are put at ease. There, he found the

[Soulweave Vessel], which he brought back to Light's Hope Chapel.[6] He would later return as, while the Soulweave Vessel aided the Argent Dawn's investigations into the world beyond and the transition from life to death, he believed that with more vessels, they may be able to discover the truth behind the bridge between worlds, and perhaps the reason why the scourged do not fully make this transition.[7]

Light be with you, commander.

Trevor was his friend and Andarin Lightblade knew him as well.[8]