From Wowpedia
(Redirected from Leper Gnome)
Jump to: navigation, search 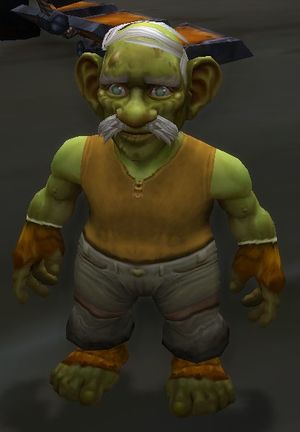 Haggle in the Deeprun Tram.

Leper gnomes are a diseased, twisted, violent and mutated race of gnomes who wander through the irradiated halls of Gnomeregan.[1] Their minds left crazed by the irradiation of their city, the leper gnomes will attack any who dare enter their city, believing them to be trogg invaders. Due to their exposure to the poisons and radiation of Gnomeregan, eventually, they may devolve further until they become mindless but mostly harmless puddles of toxic sludge.[2]

Both Razzle Sprysprocket and Ozzie Togglevolt are trying to find a cure for leper gnomes, and if they manage to do so then gnomes will have both their capital back and the recently cured leper gnomes.

When Gnomeregan was invaded by a horde of troggs unearthed from the Uldaman excavation, High Tinker Gelbin Mekkatorque ordered the opening the pressure valves of their giant, grinding machines and released toxic radiation (via an exploded radiation bomb)[3][4] throughout the city.[5] Many more gnomes were killed than troggs when Gnomeregan was flooded with radiation.[6] Forced to flee to the safety of the dwarven capital of Ironforge, Mekkatorque had to deal with the guilt of his actions that day, actions brought on by his chief advisor's lust for power.[7]

Even worse, though, many gnomes still within Gnomeregan's halls became horribly mutated and insane, changing into what are now known as leper gnomes. Leper gnomes vaguely resemble normal gnomes. Emaciated and sickly, their skin is bloated and green with gangrene, while their eyes glow with a color and light similar to that of the radioactive pools in their once beautiful city. Even worse than their physical mutation, though, is the perverse madness caused by the poisoning that twisted their bodies. While individuals among them may seem saner than others, all are irrevocably twisted. Leper gnomes claim Gnomeregan as their own, and, led by Mekgineer Thermaplugg, defend its halls with horrible constructs and their own prowess. They continue their battle against the troggs, who are more dangerous now due to the radioactive goo that clings to their rock-like skin. Perhaps the worst enemies in their minds, are true gnomes, whom they blame for their current existence. They regard High Tinker Mekkatorque as a demon, and his followers not much better. They regard all other creatures as intruders and quickly put them down. Recently, however, some adventurers have seen leper gnomes in company with Dark Iron dwarves. Many theorize that Thermaplugg is attempting an alliance between the two underground races, in an attempt to strengthen his own forces and finally defeat the troggs.[6]

Leper gnomes are found almost exclusively in Gnomeregan, the doomed capital of the gnomes. There are also many leper gnomes at the Steamvault in Coilfang Reservoir allied to Illidan and his naga. There is an apparent leper gnome (he can also be undead gnome, lacking unique model) named Ganoosh in the Undercity, another named Haggle sifting through the trash in the Deeprun Tram and several leper gnome laborers (possibly slaves) in the cellar of a blood elf clothier guarded by a level 60 succubus in Silvermoon City. Note that all NPCs that use leper gnome models may not necessarily be leper gnomes. The model may be used to represent other types of sickly or undead gnome forms.

Leper gnomes can now be found in mass on the eastern shores of Uldum, not through disease or radiation, these gnomes succumbed to an ancient curse that robbed them of their sanity. It's not known if these are truly leper gnomes or just their model being used to represent a cursed form.

Several in-game characters Ganoosh, Apprentice Crispin and Jennings work with the Forsaken, but it's unclear if they are leper gnomes or possibly undead gnomes. They all seem to be part of the Royal Apothecary Society; at least, on an assistant or secretarial level. They have not been seen to hold much authority.

Forsaken Apothecary Jerrod says about his assistant Apprentice Crispin: "Sure, he's not been plagued in the same manner as we have, but he is clearly plagued nonetheless". This could imply a leper gnome or undead plagued in a different manner.

[Rotten Helper Box] has a chance to be contained in

[Stolen Present] during the Feast of Winter Veil.

Leper gnomes speak Gnomish and Common. Leper gnomes learn the languages of the creatures with which they live and compete.[8]