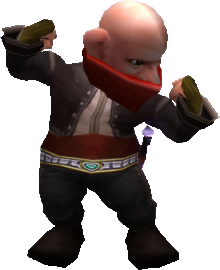 Twinking used to be fairly common prior to Wrath of the Lich King, and even so after. level 5 twinking, both pre- and post-WotLK, is quite rare. level 5 twinking requires using gear without a level requirement coupled with high level enchants. It is usually gear that is available from the very start of the game. While creating a level 5 twink is relatively easy, to become a true force to be reckoned with, it will cost a lot of gold and time.

With the exception of the new Heirloom items, all gear that can be obtained and equipped onto a level 5 character generally has LOW stat bonus, as it is either Junk or Common gear. Although there is gear that can be applied to level 5 characters, it cannot be obtained as quests for such gear usually do have level requirements. However, Enchanting and other professions are what level 5 twinks are mainly based on.

This patch introduced a big nerf to Goblin Rocket Boots, which had obtained a minimum Engineering level requirement of 225, which is unreachable until level 20.

This patch generally wiped out almost all level 5 twinks, specifically dodge twinks. Prior to this patch, twinks were able to stack dodge enchants and items to be completely unhittable, as the twinks would Dodge all attacks. This was possible due to the formula for dodge ratings being very generous to low levels since such formulas were level based. Blizzard nerfed this by changing the formula so that all characters under level 34 now gained dodge percentage at the same rate as level 34 characters.

During this patch the Wrath of the Lich King expansion went live and introduced the Bind to Account 'Heirloom' items, that scale with level and are very powerful for level 5 twinks. The items include shoulders, weapons and trinkets. There's also a

[Wintergrasp Commendation], which makes the acquiring of the PvP trinket much easier.

Many major enchantment (the true source of a twinks power) were given level requirements making them unusable at level one. The head enchanting librams, the leg armor kits, and the old Naxxaramas and WotLK resilience shoulder enchants were the major nerfs. However, since these changes affect all lower levels, we will still see level 5 twinks practicing this existential WoW exercise (as Ratherbrute so eloquently stated in a wowinsider.com - it's now wow.com - interview). We will just no longer see them with 1300 health, 100+ spell power, or 105% crit ratings

The new patch introduces a feature to turn off all experience gains ingame - what a cool thing for twinks. Now with that option enabled there is no longer a need to avoid exploring, killing mobs or doing quests. There are some new heirloom chestpieces and weapons, too.

This patch allowed Rogues to Dual wield at level 5, giving a huge advantage to level 5 Rogue twinks. Warlocks can now also summon their imp at level one. Also you won't become dazed anymore at level 5 which helps to explore.

Why are they so powerful?

level 5 twinks are potentially able to wipe out any character up to about 25 (buffed) and 35 (unbuffed) provided they are not twinked themselves. The reason for this is that stats are calculated differently at level 5. A level 5 with 12 crit rating gains 22% critical strike chance, as opposed to under 10% higher levels receive. A full agility build can get a good 75% crit chance and a good 85% dodge. A balanced build can get 50% Dodge, 50% crit, and a solid 15 DPS. Perhaps the only statistics NOT affected by level are Intellect and Stamina, and as such your health is probably the only thing that needs to be watched in battle.

How to get started?

So you're thinking about making your own level 5 twink or twinking your bank alt? No problem. First of all, you will need a lot of money and some help from friends (and one of them should be a warlock). Choose your class first. Of course, the obvious and most popular choice for a level 5 twink is a rogue but other classes (including casters) are also viable, though their survivability and power varies.

One of the most important things for a level 5 twink is the experience bar. Since you only need 400 XP to ding to level 2, you have to be very careful because uncovering most parts of your map awards you with 45-55 XP. So be sure to get to the battlemasters and turn off XP gains as soon as possible.

Since you are not going to spend the rest of your life in the city like a casual bank alt, you have to find a good place to duel low level players. For Alliance players, the best place is Goldshire and you can go there on foot from Stormwind City. Alternatively, you can go a bit further to Sentinel Hill in Westfall or Thelsamar in Loch Modan, since players in the 12-20 level range (your primary targets) are usually questing there. For Horde players, the choice is easier. The best place is without a doubt Crossroads. When you get to your destination, you can learn the flight path and later easily move between this place and your capital. Both factions can also twink in Ratchet, but the Alliance players should go there by boat from Booty Bay, so they can have a permanent way back to Stormwind City through a flight master.

Any gear that has no level requirement or is not a quest reward can be used (excluding the starting clothes, since they cannot be enchanted), but the most notable and the best in slot items are listed below. Remember that all the gear, aside from

[Insignia of the Horde] (or Alliance),

[Red Defias Mask] and the Brewfest Hats, is non-soulbound or BoE, and thus can be found in the Auction House or traded between characters. This information is crucial, since if you accidentally ding with your twink, you will be able to send most of the equipment to another level one character, making him/her your new twink.

Below are enchants that will, at level 5, essentially make your twink what it is. Can be enchanted by Enchanters, unless otherwise stated. Since most items are below item level 35, they cannot have Burning Crusade enchants, and will have to settle for the best, and the more expensive, Pre-BC twink enchants. Remember that it's up to you which enchants to choose, however, a good mix of stamina and DPS/caster enchants is recommended.

Useful for travelling or exploring.

Learn your twink's strengths and weaknesses. You will have a limited number of abilities to use, so learn exactly when to heal, or when to attack.

Learn how to defeat different classes. If you are melee, mages and hunters will kite you. Paladins will heal themselves. Rogues will attempt to run away and stealth, wasting your cooldowns.

Pick your target. While three-shotting level 5 players is fun, it isn't impressive. Look out for higher level players (15-25) with bad gear or seemingly limited skills to pick on. Avoid players with heirlooms.

Find other level 5 twinks to duel: these can be challenging and fun.

Always be open and explain how you got titles / loot. Be patient to those who accuse you of hacking or cheating.

The following are temporary buffing items, or otherwise combat affecting items that can be used at level 5.

There are now 4 titles obtainable at level 5. They will not make your character do any better as a twink, but it might be something to pimp your twink even more.

Below you'll find a list of items you can use at level 5 to amuse your enemies. These items can only improve the fun factor of playing your twink, since their effects are purely cosmetic (with the only exception being the

The following are buffs you can receive at level 5. This only includes world buffs and buffs from other players.

NOTE: The reason that many high level buffs were not listed here, specifically player buffs, is because all player buffs are automatically downranked to a rank trainable at level 10 or lower when used against level 5 characters. One other thing to be noted is that buffs that do not last very long, such as Power Word: Shield and Drums of Battle, should be buffed only seconds before the start of a duel to maximize effect, as well as the fact that a player cannot be buffed by others during a duel.

Since Patch 3.3.0 players below level 10 cannot join a raid group. So while the format has changed, twinks are looking at more creative ways to down these 'raid bosses'.

All the following encounters are listed and detailed for twinks. Non-twinks are recommended to stay away from these encounters entirely.

Difficulty: Not very hard, if done properly (3/10) - 5-man.
Gear: Twink (6/10) - Requires most non-soulbound gear.
Lizzarik is a travelling businessman selling various green and white swords. Lizzarik patrols with his friend Jorb a lvl 37 ogre from Ratchet to The Crossroads and back again. Both Lizzarik's and Jorb's level might be varying from time to time. Lizzarik alone used to be a nice step up from the classic Gamon raids. The tricky part with Lizzarik is that his friend Jorb bodyguards him. This means that either you have to get rid of Jorb first or take both of them in one fight. After recent patches fighting both Jorb and Lizzarik attracts the lvl 40 guards nearby making them attack you. You cannot fight the guards back. This means that the safest thing to do is to fight Lizzarik while he is patrolling between Ratched and The Crossroads. This also adding another problem, hostile mobs. When fighting Lizzarik outside The Crossroads and Ratchet you have to be careful not to aggro any nearby mobs. Lizzarik yields no loot and no exp when killed.

Difficulty: Moderate (6/10) - 10-man
Gear: Twink (6/10) - Requires most non-soulbound gear.
Only available once per 15 minutes during Hallow's End. Lands after all fires are put out.

Difficulty: Hard (8/10) - 25-man
Gear: Twink (8/10) - Requires all non-soulbound gear.
Blackhoof has no tricks or abilities, and is a rather simple encounter. You will lose 25 Cenarian Circle Rep.

Attunement:
This encounter requires a level 5 attunement of a sort.

This will add Cenarion Circle to your reputation list at 2975/3000 Unfriendly and allow you to set it at war.

[Insignia of the Horde] highly recommended.

[Furbolg Medicine Pouch] recommended as well.
A Doomguard is summoned by a Warlock, and automatically kills a random party member upon summoning. This is considered the hardest level 5 encounter. To set up the encounter, do the following:
Find a remote location to duel, suggestively between the Valley of Trials and Razor Hill, due to it being the quietest place, with almost no high level character interference.
Use self-buffs and self-buff items for a "real"-style raid encounter.
You should summon the encounter near the graveyard, but far enough to keep away from mobs and guards. This way you can quickly resurrect as soon as you go down to avoid a total wipe. With 10% durability loss per kill, you can have up to 9 deaths per encounter, with 1 try per hour due to the cooldown.
Have the Warlock in your group for a "real"-style raid encounter, where upon summoning a random party member will be killed.

Having twinks stand at either side of an enemy will cause the enemy to consistently switch targets between the twinks because any mob higher than level 5 has an extremely high chance to parry attacks coming from the front. This will enable constant attacks to the back which cannot be avoided.

GREAT kiting at level 5. Gives you GREAT distance over your opponent to pull off ranged attacks or to use your bandages that can heal up to 250 a second.

This combination can be very nice at level 5, especially against other Rogues and Warlocks. It will take off up to 13.75 seconds off of

The possible temporary enchants are:

An Alliance guild on the US server Norgannon