This guide has been updated for Warlords of Draenor over at Wowhead.

This guide was written for a level 70 Hunter, if you're 71-74, the enchant values and stat conversion values will be off.
Written by Kiingzy-Frostmourne(US)

Racials:
The most important thing to consider when creating a twink is the racials, below is a list of the relevant ones for PvP.

Base Stats:
Each race has different base stats, the amount it varies by is between 2-10 depending on race. The races listed below are the highest for both factions. If more than one from a faction is listed, they are equal. The full list can be found here.

Agility is the most important stat. 1 agility will give hunters more DPS than 1 of any other stat (except, of course, for ranged weapon dps).

The PvP Hit cap will vary depending on your faction:

For every level above your own an additional 1% of both stats is required. The highest level in this bracket is 74.

talents and glyphs have become situational. Pick what best suits your playstyle. Below is an outline of the talents.

To get the best in slot enchants you'll need the following reputations.

To get the best in slot gear you'll need the follow reputation.

World of Warcraft has many professions and all of them have a decent bonus. There are two categories: Gathering and Production.

Below are the benefits from the three gathering professions.

For the values when used on a level 70 please see the Enchants section of this guide.

The top items are the Best in Slot. (BiS). 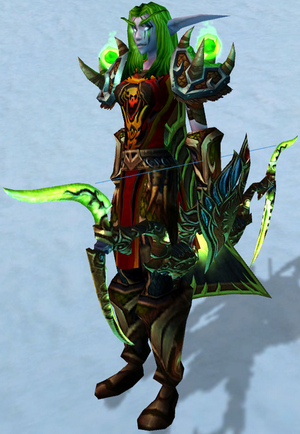 This is the Season 4 PvP set.
For most classes since the introduction of base resil this gear doesn't compare to the above PvE gear, only use this while you gear up in raids.
Not including the ranged weapon or the heirloom trinket, the entire set will cost you 1500 Honor Points.

Despite the Golden Bow having lower DPS than Thori'dal, it's actually slightly better for burst DPS with shots based off weapon damage.

Since 5.4 gems now scale with character level. Tooltips are stats while in a BG, to the right are stats when in arena / world.

For PvP train your pet in the Cunning specialization, this is for the


The individual pet families also have their own special abilities which include a snare, slow, silence, stun and disarm. The duration, cooldown and range of these spells are different for each. At this level you'll be given 4 stable slots, select four abilities you want and swap between them as needed.

Pets with green backgrounds are exotic, meaning you'll need to be Beastmastery to use them.

To save having to constantly swap out spells on your action bar, this macro will change depending on the pet you're currently using:

As an example, this will cast Clench with a scorpion out and Web with a spider out.

There's no limit beyond the macro character limit, you can also use your pets name instead of its unit type.

To get a pets unit type, while you have it out, copy the below into chat and it'll be displayed in the default chat frame.

[Roar of Sacrifice] use:

This profile does not have any profession specific items or enchants.