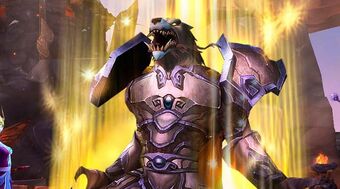 Leveling is one of the core game systems in World of Warcraft.

The term leveling refers to the process of gaining experience in order to level up. It is one of the core systems of World of Warcraft, which can be seen as a game divided in two parts: the game during leveling a character and the end-game. Game features such as new spells are unlocked gradually while leveling in order to ease the overall learning process, and to prepare the player for use of a full set of abilities as well as the widest array of available dungeon and raid instances and other challenges reserved for end-game. It can also be applied to skills where one tries to gain more skill levels or points. Leveling in a manner as quick and efficient as possible is called power leveling.

On World of Warcraft's release, leveling was primarily achieved through quests, fighting non-player enemies, and venturing through instances. Each zone was designed for a specific level range, and player versus player activity didn't reward any experience points. Players could boost their gains only by resting: staying in major cities or inns (logged in or logged out of the game). There was a level cap of 60.

In The Burning Crusade, the level cap was raised to 70. 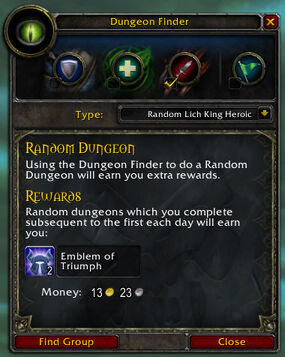 With the introduction of LFD in patch 3.3, many players started to level only through dungeons.

In Wrath of the Lich King, the level cap was raised to 80 and many changes arrived to the leveling process. With patch 3.2, experience could now also be earned by completing objectives in battlegrounds. Heirloom items were also introduced to the game: these items scale with player level and offer bonuses to experience earned from completing quests and killing mobs. These experience bonuses stack with each other and with the rested bonus.

[Essence of Wintergrasp] was introduced as well: a buff that is available for every player in Northrend, as long as their own faction controls Wintergrasp. The Looking for Group tool also facilitated dungeons in the game, making a lot of players opt to level only through this system.

With Cataclysm, the questing process was completely revamped in the original zones of the game, introducing Blizzard's modern approach to quest design. The level cap was also raised to 85.

In Mists of Pandaria, the level cap was raised to 90.

In Warlords of Draenor, the level cap was raised to 100, and the heirloom system was enhanced, allowing alts to create their own copies of unlocked heirlooms for free. Additionally, Warlords introduced an heirloom mount which can be used from level 1.

In Legion, the level cap raised to 110. The developers also loosened the linearity of the questing experience, by enabling a zone scaling system in the new zones of the expansion. This allowed the player to choose any zone order when leveling from 100 to 110, with quest rewards and monsters scaling accordingly to the player's level. In patch 7.3.5, this system was expanded to the rest of the game's zones: 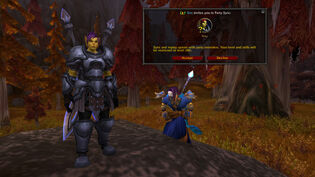 For the first time ever, players were allowed to replay quests with the new party sync function (patch 8.2.5).

In Battle for Azeroth, the level cap was raised to 120. New allied race characters started at level 20 instead of level 1. A party sync feature was also released in patch 8.2.5, allowing players to scale down to help lower-level friends in earlier levels and to replay quests with them. The recruit a friend program bonuses and rewards was also revamped in this patch.

World of Warcraft: Shadowlands will bring a level squish reducing the current max level from 120 to 50, new level 50 to 60 zones in the Shadowlands, and a new starting zone called Exile's Reach from level 1 to 10. Old players will still be able to choose in which starting zone they will begin, and which expansion they will level from level 10 to 50, but new players won't have this option, instead they will have to do Exile's Reach and level in Battle for Azeroth. Core race hero class characters will start at level 1 instead of at higher levels. Allied races will start at level 10 instead of 20.