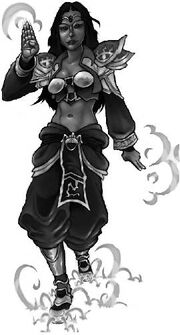 It is an occult truth, known to all who study the ways of magic and spellcraft, that great lines of power crisscross the lands of Azeroth. These lines of magic are often harnessed for mighty magical purposes, from the creation of moonwells to (some say) the powerful glowing dome in Dalaran. It is simply assumed that those with power eventually must seek out one of these sites. But those who study the mysteries of the ley lines discover something more. Certainly, there are lines of power that run across the land in a select few areas, but these are not the only lines — simply the most obvious. If these are thick, corded ropes of power, there are also tiny, web-thin threads that run between these great ley lines, connecting them in a vast net of pulsing, subtle power.

The ley walker is a magician who has discovered this fact and seeks to harness the power of these threads. A ley walker is aware that, every moment of every day, these threads permeate all things, passing through, around, above and below all things, carrying magical energy from the Well of Eternity to all things in the world. With diligent study and practice, ley walkers sense these powers.

The sorcerous feats of which these men and women are capable are impressive. They are able to draw upon the skein of power to augment their spells, tap into this web to maintain spells past their normal durations, to heal themselves, and to protect their allies from magic.

Of the arcane classes, magi, inscribers and runemasters are most likely to take this class, for they are the ones who treat this knowledge as truly important — they steep their magics in this world, rather than in the world of the dead, or in the Twisting Nether. Indeed, inscribers and runemasters understand the secrets of these ley lines better than most, and so this prestige class is natural for them. Any of the divine spellcasters are likely to study this path as well, particularly druids, shamans and priests of Elune. In particular, this path is found among the night elves and the tauren, though many dwarven ley walkers have expanded the realms of understanding by studying the strange ley lines that crawl through the deep caverns. Most folk don't know a ley walker from any other magician. It is only among societies of magicians (such as the Kirin Tor) or priestly orders that those who study these arts stand apart, for they tend to steep their magical discussion in terms of interaction with the ley lines of the world, much to the irritation of other magicians, who find this set of symbols to be useless to them.

In such societies, ley walkers tend to have one of two reputations — crackpots who are obsessed with what is considered just a small facet of the magical knowledge in the world, or truly wise scholars and sages of a set of deep mysteries.[1]