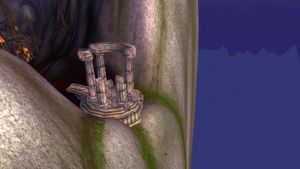 is a small area with some ruins overlooking the Rim of the World in the western-most part of Mount Hyjal. It is named for Leyara, wife of Valstann Staghelm, daughter-in-law of Fandral Staghelm and Druid of the Flame. She harbors an intense hatred for Malfurion Stormrage, blaming him for the death of her daughter, Istaria. Istaria is buried near the entrance.

Leyara is found here during

[85] Leyara, it's here a short scene takes place where she 'kills' the arch druid in front of the heroes.