From Wowpedia
(Redirected from Leyline)
Jump to: navigation, search 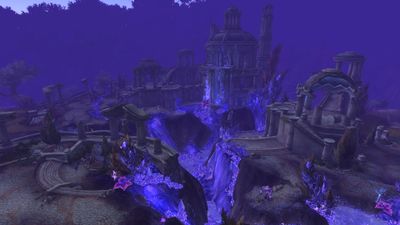 A damaged ley line with crystallized mana on the surface.

Ley lines (or leylines) are channels of immense power that course through the earth of planets[1][2] like blood vessels carrying arcane magic[3] instead of scarlet fluid.[4]

The Arcanomicon, a map of all ley line intersections on Azeroth.

In Azeroth, the lines are intersected by a series of "anchors"[5] to form a complex arrangement in which the whole planet is draped.[6] Said junctions are catalogued in the Arcanomicon, the map of all ley lines gifted to Malygos by the titan Norgannon.[5]

Ley lines exist all over Azeroth and are sources of deep and natural magic. They are often harnessed for magical purposes, from the creation of moonwells to the portal spells created by magi.[7] The raw energy within ley lines can build and build if the flow is restricted, resulting in a ley fissure. These points become an easy access point for travel and further study.[8] Many places overwhelmed with ley line energy can be deadly to the beginning Dimensional Rifter. In places like these, the sheer number of rifts create instability and the potential for important belongings to be severed from your person.[9]

Archmage Vargoth studied the ley lines of Draenor and discovered several similarities to those on Azeroth. He believed this may indicate a similar genesis.[10]

Ley lines on the surface tend to crystallize in the form of glowing purple mana crystals.[11] 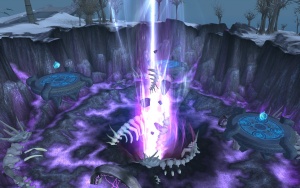 The Azure Dragonshrine, where Malygos was redirecting ley lines.

The Mystic Runesabers feed on magic and have recently emerged from the shadows in search of ley lines.[12]

Stellagosa, and presumably the rest of the blue dragonflight, are capable of seeing the ley lines when they are underground.[13] 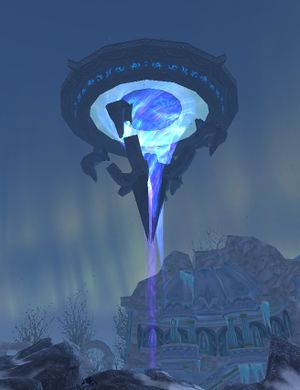 Ley lines can also be redirected. Malygos used surge needles to redirect Azeroth's ley lines into the Nexus and to the Twisting Nether[14][15] which triggered the Nexus War.[16]

[Sarcen Stone] was created during the War of the Ancients to redirect ley lines and draw power away from the Legion's portal.

The nightborne conduits located in the Arcway can direct the flow of power within ley lines. The Nightfallen use them to direct the power to Shal'Aran.

Before Malygos redirected them,[16][17][18][19] all ley lines on Azeroth led to a location under Karazhan.[20] The Kirin Tor then spent years reversing the damage done to Azeroth's ley lines, eventually restoring them to their former power.[21]

Most of Outland's ley lines were destroyed or upheaved after Ner'zhul opened so many portals.[42]

Across the face of the world there flow lines of power - patterns of magical energy that carry vitality of the lands of Azeroth through them, like blood vessels in a creature. These lines of power are recognized subtly by every culture; the races of Azeroth identify them as those places sacred to the Light, the chosen locations of moonwells, haunted places where the power of death has tainted the flow of energy, and natural sites overflowing with elemental power that are sacred to shamans. Most cultures, however, only really focus on those places where the lines converge and meet, seeking to tap the most power from them. Those who seek to understand and master runic power understand that the convergences are not the only important part of this power - the patterns formed by the lines themselves are important as well. These patterns, which resemble letters in a strange alphabet, are called runes.

There are lines of power that run across the land in a select few areas, but these are not the only lines - simply the most obvious. Inside of these thick and corded ropes of power, there are also tiny, web-thin lines that run between these great ley lines, connecting them in a vast net of pulsing, subtle power.

Those with great magical power and ley walkers seek out these sites.[48]

A community which sits on top of a convergence of two or more lines of magical energy is called a "ley line nexus".[49]