Liches are powerful undead beings. Usually bound to the iron will of the Lich King, they mainly wield frost magic and necromantic spells.[1] Typically appearing as large, floating, skeletal figures wrapped in long robes, they are often found in high-ranking positions within the Scourge.

Unlike many other forms of undead, a lich's soul is not imperfectly attached to its body; instead, liches bind their souls to special containers known as phylacteries, which then allows them to generate a physical form. This is why lich bodies look nothing like their former mortal selves, and also why one has to destroy a lich's phylactery to truly kill them; as long as a lich's phylactery and soul are allowed to remain intact, the being can never truly die and will always be able to regenerate their corporeal body.[2][3]

A lich from Warcraft III

While on Draenor, Ner'zhul, the orc who would later become the Lich King, commanded a number of orcish warlocks and spellwielding death knights. Yet, when Kil'jaeden and the Burning Legion captured these sorcerers after that world's destruction, they were transformed into twisted, spectral aberrations of their former selves. These newly born liches possessed tremendous magical powers, yet their immortal, undead bodies were bound to the iron will of Ner'zhul. As payment for their undying loyalty to Ner'zhul, the Lich King granted them control over the furious elements of Northrend. Now, the liches wield frost magic along with their own considerable necromantic spells.[1]

It is possible for mortals to become liches even without the aid of higher powers such as the Burning Legion. During the Third War, the leader of the Cult of the Damned, Kel'Thuzad, was reanimated as a lich by Arthas Menethil using the power of the high elves' Sunwell.[4] It appears, however, that the power of the individual being raised as a lich is directly proportional to the amount of power required to bring them back. For instance, Kel'Thuzad, being an extremely powerful individual, required a nexus of powerful ley-energies in order to be reanimated.[5]

Following the defeat of the Burning Legion at Mount Hyjal and the weakening of the Lich King's hold over the Scourge, a few liches, such as Ras Splinterspine and Morbent Fell, chose to serve the Legion and sided with the dreadlord Balnazzar during the uprising of Sylvanas Windrunner.

There are troll liches in Zandalar.

In Maldraxxus, liches are scheming skeletal sorcerers who use anima to fuel their potent magic and practice their craft in the House of Rituals.[6]

* Phylactery unaccounted for; defeat may be impermanent. 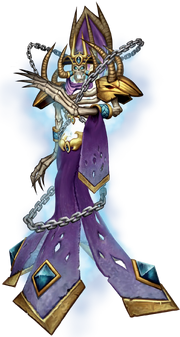 A lich in the Monster Guide

Artwork of a lich from Manual of Monsters

A lich is a powerful undead sorcerer who possesses tremendous magical power. During his mortal life as the warchief of the orcish Horde of Draenor, Ner'zhul commanded a number of orcish warlocks and even some of Gul'dan's death knights. When these wicked sorcerers were captured by Kil'jaeden and the Burning Legion after the destruction of Draenor, they were transformed into twisted aberrations of their former selves. Ner'zhul became the Lich King at this time. The sorcerers' new, undead bodies, though immortal, were bound to the iron will of Ner'zhul. Since the liches showed unswerving loyalty to their master, Ner'zhul granted them control over the furious elements of the cold north. Now, the liches wield frost magic along with their own considerable necromantic spells.[7][8]

Service to the Scourge

Liches are among the most powerful spellcasters and allies of the undead Scourge, serving their master with evil intent and great power. Often, they command armies as generals, surrogates for the Lich King himself. They are deeply entwined with the cold power of the grave. As a rule, these creatures are power-hungry, devious, and vicious. They utilize their great intellect and dark powers not only to serve the Lich King, but also to defeat each other in subtle political machinations, gaining strength and renown from each opponent's death. A lich resembles a skeleton with a chill blue glow emanating from within its bones. Liches often dress in flowing robes. These creatures are fond of pageantry and deception; they will often dress in the robes of a king or priest and expect their followers to call them by powerful-sounding names. Sometimes, they claim extraordinary powers granted directly from Ner'zhul himself, acting as though Ner'zhul were a god and they were his chosen priests or prophets. Instead of walking on the ground as mortals do, liches float above it on frosty mist. A lich floats from 6 -12 inches above the ground. Liches cannot trigger pressure plates or similar traps, nor do they leave footprints. Most difficult terrain does not inhibit liches, and they can cross calm water and other liquids with this ability. This movement is otherwise similar to normal movement, so liches can still fall down pits, for instance.

Typically, the Lich King elevates only necromancers to lichdom, but rumors speak of the occasional mage or shaman who also attains this status. Some tales imply that a spellcaster with enough personal and magical strength can willingly turn himself into a lich, but these reports are unsubstantiated. Some powerful necromancers can temporarily transform themselves into a lich.[9][10][8]

The rogue liches walk Kalimdor with no intention of raising an army as when they were under the command of the Legion. Even a single undead draws attention; putting together a large group will surely get the local populace upset. Instead, these liches harbor a single, driving goal; revenge. They seek out those who helped bring about their downfall, first destroying all that they held dear and then bringing ultimate retribution upon the target.[11]

Human necromancers are the most likely candidates for liches. Chilling mist billows from this skeletal figure. It floats in a cloud of mist, and black robes flow from its evil form. These liches are evil, cunning, and loyal to the Lich King. They serve as generals of armies and as advisors to other powerful members of the Scourge. These liches are somewhat inexperienced and probably new to undead existence, but they are filled with power and arrogance. Liches prefer to have hordes of undead minions surrounding them. These lesser undead creatures protect the lich while he casts spells from a distance. Liches have no qualms about fleeing if the situation warrants.[12]