Lieutenant Horatio Laine is a senior Stormwind investigator dispatched to Westfall to investigate a series of crimes. He can be found in various locations around Westfall, including the Jansen Stead, Furlbrow's Pumpkin Farm, and Sentinel Hill, during the Westfall storyline. 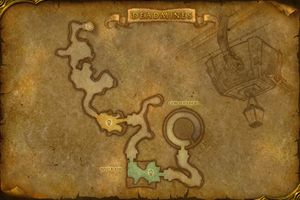 , on the left side of the friendly area, where he starts the Deadmines storyline. 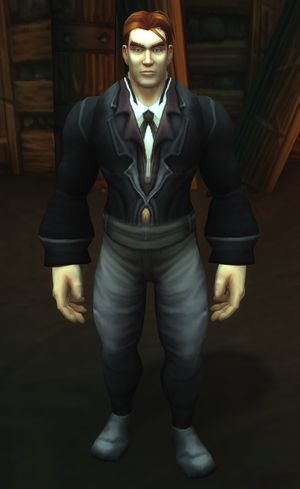 Horatio inside the Deadmines.

After the Cataclysm, the Furlbrows were murdered which started to an investigation led by Lieutenant Horatio Laine. Laine questioned the nearby people about the event, which led to two different leads; gnolls and murlocs. Laine didn't believe that neither gnolls nor murlocs could have killed the Furlbrows because the murder seemed too perfect. He decided to follow up given he had no other lead.

Since neither of the two suspects had any worthy clues on them, Laine decided to initiate plan "Be on the lookout for Two-shoed Lou". Lou was a old informer of Laine's who lived on the Furlbrow's pumpkin farm. Two-shoed Lou pointed Laines detectives in the direction of an old mine, Jangolode Mine. Inside the mine the detectives overhear a conversation between the ogre Glubtok and a shadowy figure about Glubtok joining forces with the shadowy figure. The detectives headed back to Two-shoed Lou to discuss the discovery which Lou refuses to talk about. Lou told the detectives that a couple of thugs recently showed up and might be of interest to the investigation.

After disposing of the thugs two shots and a scream could be heard from the front of the farm. Two-shoed Lou had been silenced and Laine knew it had to be a message to everyone who would rat out the organization behind the Furlbrows murder. Comparing the evidence with his detectives without much luck, they needed a better lead than a water-soaked letter, some scraps of red cloth, a mysterious conversation between the ogre mage and the shadowy figure and a confession from four thugs who had been killed in the process. Laine ordered his detective to talk to a farmer named Saldean southeast of the Furlbrow's farm. The Saldeans sent the detective to the Alliance stronghold where their adoptive daughter, Hope Saldean, was located. When the detective met Hope, Laine showed up to speak with Marshal Gryan Stoutmantle about the investigation and discusses the worgen Ripsnarl who is locked in a stocks next to them.

Marshal Stoutmantle and his agent Amber Kearnen gave the detectives some leads that points them in the direction of Moonbrook, where the Shadowy figure was organizing a rally of homeless and vagabonds to rise against Stormwind for neglecting the people while they prosper. With the help of a shaman, Thoralius, a friend of Gryan, the detectives were able to assist the detectives by delving into the spirit world. By walking into the Deadmines and using the incense, provided by Toralius, they were able to witness the defeat of Edwin VanCleef three years ago. After the Alliance adventures left to tell Gryan of their success, a small girl came out from the shadows saying only one word, "daddy...".

The detective quickly returned to Sentinel Hill to inform Gryan about Vanessa VanCleef. Upon telling Gryan about Vanessa the Brotherhood attacked and began to set the town on fire. Hope Saldean then revealed herself to be Vanessa VanCleef in disguise. Laine asked why Vanessa had the Furlbrows killed, she answered that they were the only ones who had seen her before the fall of her father. Gryan sent the detective to Stormwind to inform the king about the attack on Sentinel Hill.

He then appeared inside the Deadmines, coordinating a strike at the Defias Brotherhood. 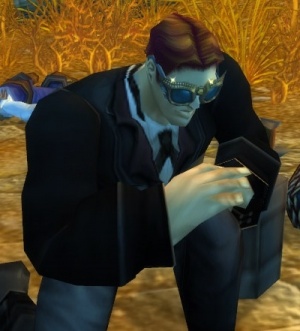 Horatio with his signature sunglasses.

This section contains information that needs to be cleaned up. Reason: Probably needs the text template.

When you first meet him at the entrance of Westfall

There's always something new to investigate.