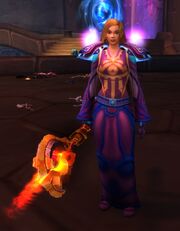 Sinclari in World of Warcraft.

After the events of the Nexus War, Sinclari tried to convince the higher-ups that maintaining an ultra maximum-security prison in the city was a bad idea, but apparently her concerns were not addressed. Nevertheless, Sinclari stayed on as head guard.

When the Burning Legion attempted a breakout during their third invasion, Sinclari found herself, to her great frustration, facing the same situation all over again. Adventurers once again prevented the breakout, and Sinclari decided to refocus on who she should speak with in the chain of command to get the facility shut down.[1]

Reinforcements, finally! The prison guards can't gold out against this invasion for much longer! You'll have to relieve my men and try to hold out for as long as you can. There's still some power in the defense system available. Use the activation crystals located around the prison to trigger a discharge if the situation worsens.

Activate the crystals when we get in trouble, right.

Prison guards, we are leaving! These adventurers are taking over! Go go go!

I'm locking the door. Good luck, and thank you for doing this.

You did it! You held the Blue Dragonflight back and defeated their commander. Amazing work!

I told them this would happen.

Sinclari appears as one of the bosses that can be encountered in the Dalaran Heist single-player experience in the Rise of Shadows expansion for Hearthstone.