For the manga character, see Thorn.

Lieutenant Thorn is a level 94 worgen quest giver found at Lunarfall in Shadowmoon Valley. Thorn arrived with the first wave, left to fight and later appeared standing in front of Maraad. When the garrison is established, she takes her place behind the Command Table in the Town Hall, and has lost her right eye. She also served in Pandaria.

When the Burning Blade attacks Lunarfall to retrieve the

[Heart of Gorgorek], Baros, who has an infatuation for her, takes an assassin's dagger meant for Lieutenant Thorn and dies protecting her. Furious, as she was smitten with Baros as well, she transforms and stays in her worgen form. 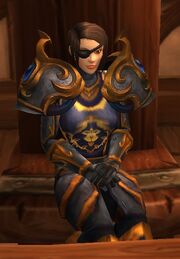 Thorn in her human form.

<Thorn points to her eyepatch>
I bear the mark of my naivety and own this mistake.