Protect Zallestrasza while she conducts the ritual.

The Thornspeakers were assisting me but they have troubles of their own.

I came in search of a powerful dragon who fell in battle many centuries ago. Melting snows have revealed Vadekius's final resting place.

My Queen has tasked me with ensuring his body cannot be reanimated and enslaved. The ritual will require my full attention and my druid friends aren't fit for combat.

Watch my back while I ensure my cousin's soul flies amid the branches of G'Hanir, safe from undeath.

You will also receive: 46

Will you watch my back as I complete the ritual?

Thank you for your help.

Travel to Vadekius's Rest
Mounting Zallestrasza, she takes off east, flying over the Iceveil Glacier.

Well met, <name>. Word of your heroic deeds as a champion of Azeroth are known to us.

I am ready. Begin your ritual.

Protect Zallestrasza
Zallestrasza starts channeling her ritual.
Zallestrasza says: Watch the skies, <name>! I sense someone approaching!
What appears to be a blood elf death knight flies in on his

We know of your misdeeds, Death Knight. Your actions helped to save Azeroth from the Burning Legion, but our trust is damaged.

We know it was you who assaulted our sanctum. We know you have corrupted and enslaved Kyranastrasz.

Those are offenses against Life that will be answered for, one day.

That also did not go unnoticed <name>. My people are few and each life is precious.

It does not excuse the offense against my flight, but we acknowledge and appreciate your... restraint. For being such as you it could not have been easy.

You are a monster in Arthas's own image, <name>. When final death comes for you, I hope you will go slowly, tortured by the pain and suffering you have inflicted on others.

When all the world was engaged in greater matters, you rode across the planet dragging the dead into cursed unlife. I am sure you told yourself it was for the greater good, but mark my words, Deathlord, there will be consequences.

<Zallestrasza gives herself a little shake>

But for now, maybe you can be useful.

I am ready. Begin your ritual.

Complete
Zallestrasza says: I will not pretend to understand your motives, <name>, but I appreciate you striking down another Death Knight.

At this point, you may chose to speak with her again.

The greatest step one can take is the next one, <name>. Keep upon this path.

The Deathlord strikes at her, but Zallestrasza transforms and stuns them with a roar.
Zallestrasza says: YOU SHOW YOUR TRUE COLORS, DEATHLORD! BEGONE FROM THIS SACRED SITE!
Turning around, she winds up Watch The Tail and knocks the death knight into the ocean shallows[36.40, 80.32] 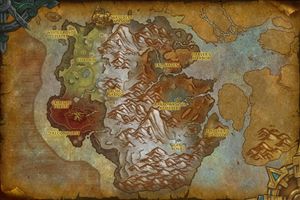