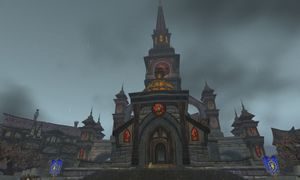 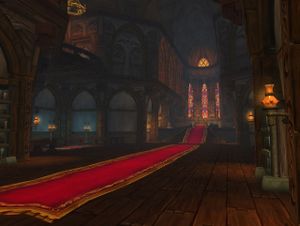 The inside of the cathedral.

Light's Dawn Cathedral is a massive building located in the center of Gilneas City. The Cathedral Quarter is right in front of the cathedral's entrance.

During the final days of the Northgate Rebellion, prior to the Cataclysm, Light's Dawn Cathedral was the site of a last stand by uncorrupted Gilneans, led by Lord Darius Crowley, against a horde of feral worgen, as part of a diversion set up by King Genn Greymane to allow Gilnean citizens to evacuate safely to Duskhaven. The Gilnean defenders (which include the player character) are overwhelmed, and eventually become worgen themselves.

[11] The Hunt For Sylvanas, a meeting between Sylvanas Windrunner, High Executor Crenshaw, and General Warhowl takes place here. Tobias Mistmantle and a Gilnean spied on them.

During the Forsaken occupation of Gilneas, the Cathedral Quarter is held by the 7th Legion. Master Sergeant Pietro Zaren, commander of the Legion's forces in the Ruins of Gilneas, stands at the doorway of the cathedral.