Not to be confused with Lightforged.

The Lightbound are an army of draenei, Mag'har orcs, and ogres from alternate Draenor led by High Exarch Yrel in service of the naaru. They waged war against the unified orc clans known as the Mag'har for the safety of Draenor. 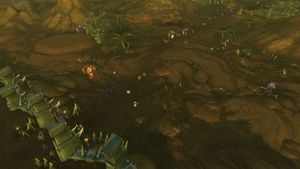 After Warlords of Draenor

After Archimonde's fall, the orcs and draenei worked together to drive the Burning Legion from Draenor. The two peoples then lived in peace alongside each other for years. During this time, more naaru arrived on Draenor and, without demons to fight, the draenei became fixated upon the Light. At some point, Draenor began to deteriorate for unknown reasons. The Lightbound believed that the Mag'har orcs were choking the life from Draenor and dooming the land to desiccation, and blamed the Mag'har for the once-fertile land becoming lifeless dust,[2] while Grommash Hellscream believed that it was the Light that had doomed the planet. Having received visions from the Light Mother, the High Exarch knew that the Army of the Light would bring order to countless worlds in the Great Dark Beyond. But first, the Mag'har needed to be taught to trust the naaru as well, for they brought peace and order. The naaru compelled the draenei to spread their influence among the orcs.

The Lightbound sent sermons, explaining they wished for all the people of Draenor to be unified in purpose. Them resisting the Light was seen as an infection that prevented "Draenor's heart from being whole".[3] A few orcs converted to the Light willingly, but others had the Light forced upon them. Some orcs even sided with the draenei against their own kin, including Grommash's own son.[4] War followed, until the two sides found themselves in a stalemate in Gorgrond, where the Lightbound refused to attack Hellsreach Citadel.[2]

Convinced that the Mag'har had no hope of winning against the Lightbound, Kor'gall, Greatson of Kor'gall and his followers secretly joined them. While the Mag'har were dealing with the ogres, Lightbound forces led by Exarch Orelis captured Evermorn Hold and used it as a staging ground for an attack against Beastwatch.[4] However, the Mag'har repelled the assault and retaliated. In their assault on Evermorn, Overlord Geya'rah, Eitrigg, and a Horde champion killed Orelis. As the Mag'har celebrated their victory, High Exarch Yrel and her entire armies arrived on the field. With her vastly superior numbers, the High Exarch offered Hellscream and the Mag'har one last chance to embrace the Light by joining the Lightbound. However, Grommash refused her offer, and stayed behind with Lantresor of the Blade to push back the Lightbound while the Mag'har led by Geya'rah fled to Azeroth with Eitrigg and the champion.[2]