From Wowpedia
(Redirected from Lightforged)
Jump to: navigation, search

“Give me a hundred Lightforged. Barring that, a thousand regular troops.”

The Lightforged draenei are a group of draenei part of the Army of the Light and the Alliance. For untold millennia, the Army of the Light waged war against the Burning Legion throughout the Twisting Nether. The draenei most committed to their long crusade would undergo a ritual to become Lightforged, infusing their bodies with the very essence of the Holy Light. After finally achieving victory on Argus, the Lightforged draenei have undertaken a new mission: protecting Azeroth from rising threats, and helping their kin from the Alliance push back against Horde aggression. They became an allied race and pledged their loyalty to King Anduin Wrynn.

They were introduced in Legion.

Originally part of the draenei who boarded the Genedar and left Argus, the Genedar then split into two different ships, the Genedar and the Xenedar, and went their separate ways.[1] The draenei's most elite warriors followed the naaru Xe'ra aboard the Xenedar to wage war on the Burning Legion. They were infused with the essence of the Holy Light and became Lightforged. 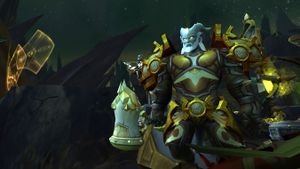 Having battled the Burning Legion for thousands of years, the Army of the Light unites with the heroes of Azeroth during their invasion of Argus.[2] Despite the Xenedar being shot down, the Lightforged rally under their champions and battle demons across Krokuun and the Antoran Wastes. Archmage Y'mera also aids adventurers in Mac'Aree when seeking Archimonde's third of the Crown of the Triumvirate.[3]

The Lightforged forces later laid siege to Antorus, the Burning Throne, hoping to end the Burning Crusade once and for all. Their forces battled the Legion's endless armies while the class order leaders destroyed the Legion's commanders, war machines, and access to reinforcements. The Lightforged were witness to Sargeras' defeat and imprisonment, their grand mission finally accomplished.

Once the Burning Crusade was over, the Lightforged turned their attention to Azeroth, where the draenei were living. Foreseeing the upcoming war between the Alliance and the Horde, the Lightforged decided to stand alongside their new allies after millennia separated.

High Exarch Turalyon believes upholding the Alliance's ideals would be a worthy cause for the Lightforged and offers the Army of the Light's services to High King Anduin Wrynn. With King Wrynn's endorsement, Turalyon and one of the class order leaders travel to the Vindicaar, still apparently home to the Lightforged, to announce the Army of the Light's acceptance into the Alliance.[4] Captain Fareeya is enthusiastic about the idea but claims that they are in the middle of recruiting more Lightforged. Turalyon invites the class order leader to witness how draenei are turned into Lightforged: The Forge of Aeons, which reinforces a draenei's mind, body, and soul with the power of the light after facing their inner demons. T'paartos is one of the Lightforged initiates and cannot undergo the trials without a second. The adventurer volunteers to take part in T'paartos' initiation ritual as his second and undergoes the trials with him. Having successfully completed the trials, T'paartos is officially inducted into the order of the Lightforged.[5] Turalyon claims the Lightforged are impressed by their strength and are more than willing to ally themselves with the Alliance, the heroes who helped them stop the Burning Crusade, and continue bringing peace and justice to Azeroth. Turalyon leaves Captain Fareeya to organize their troops while he returns to King Wrynn to give the Army of the Light's official pledge of loyalty.[6]

Captain Fareeya will task new Lightforged draenei to go forth into Azeroth and fulfill their new mandate: spread the Light's justice and uphold the ideals of the Alliance.[7]

During the assault on Drustvar, the Lightforged aided the Alliance in defending the region from the Horde. Due to threat of Vindicator Caeduum and his Lightforged, Rokhan, Master Gadrin, and Madam Konawla used a ritual to imbue Horde adventurers with the ancient powers of trolls to fight against them and with this power Vindicator Caeduum and a number of his forces were slain.[8]

On alternate Draenor, the naaru came and reforged the draenei in the Light,[9] becoming the Lightbound, a more antagonistic organization seeking to spread the Light's influence across the planet; by force if necessary. They are led by Yrel.

Lightforged draenei possess an alabaster-marble colored skin and white hair. In contrast with other draenei, the Lightforged have bright, golden eyes, and their bodies are marked with glowing and golden tattoos. Their hooves are also ornamented with gold, and their Mark of the Naaru is a different, golden sigil.