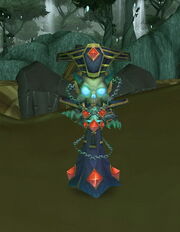 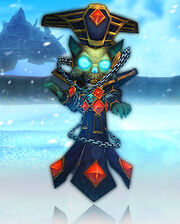 From the Pet Store

In life, Kel'Thuzad betrayed the Kirin Tor and created the Cult of the Damned. In death, he serves the Scourge as the Archlich Lord of Naxxramas.

Chill your enemies and chortle with glee with Lil' K.T. by your side.

Obey the call of tiny Kel'Thuzad - Give the gift of diminutive undead companionship with Lil’ K.T., the mini-lich. What Lil’ K.T. lacks in size, he more than makes up for in sheer malicious intensity. Watch with misplaced pride as he randomly freezes critters and laughs maniacally at your vanquished PvP foes.

Players are mailed this pet by Kel'Thuzad himself:

You may have seen me in such instances as Naxxramas, Old Hillsbrad Foothills, and... Naxxramas again.

As a member of the K.T. Fan Club, now you too can have a little piece of everyone's favorite archlich.

Enjoy! ...or I will FREEZE THE BLOOD IN YOUR VEINS.