For the Alliance base, see Lion's Landing.

Lion's Landing is an Alliance-only scenario in World of Warcraft: Mists of Pandaria.

Expel Horde forces from the keep of Lion's Landing!

The Alliance has found a foothold on the continent of Pandaria, and begun to build up their holdings on the defensible beachfront of Lion's Landing.

As if on cue, the Horde has responded, dispatching a squad of trained soldiers to strike at Lion's Landing, and shatter Alliance pride and defenses in one brutal assault. In order to ensure that the Landing survives long enough for Alliance forces to expand deeper into Pandaria, you'll first fight off waves of attackers and then crush the Horde's commander. Beware – the Horde's forces can and will surprise you with their tactics and abilities. Send them home disheartened or dis-hearted.[1] 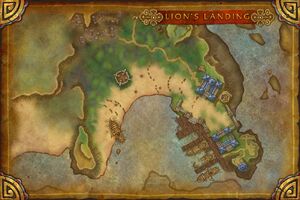 Stage 2: Death on the Docks

Fight your way through the docks to Admiral Taylor.

Gather information from the SI:7 team.

Set up Sully's weapons and prepare to defend the keep!

Hold the keep against waves of Horde invaders and their commander.