The Lion's Oath in the cinematic trailer for Legion. 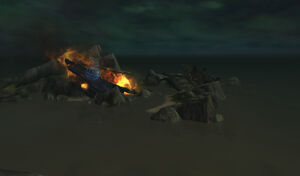 The gunship's wreckage as seen during the Battle for the Broken Shore.

The Lion's Oath was an Alliance gunship that took part in the Battle for Broken Shore on the Broken Isles at the time of the third invasion of the Burning Legion. The vessel was part of a combined Alliance and Horde fleet sent to confront the demonic Legion and prevent its further advance into Azeroth, and was the flagship for King Varian Wrynn himself.

The Lion's Oath was among the first ships to engage the enemy at the beginning of the battle, pulling alongside the Horde airship Darkspear's Might commanded by Sylvanas Windrunner. Despite the personal efforts of both King Varian and Lady Windrunner, the gunship was severely compromised by an infernal attack in which one of its main turbines was destroyed, ultimately crashing along the Broken Shore.[1]

King Varian Wrynn would survive the crash, and the wreckage of the Lion's Oath would remain on the western Broken Shore as the ensuing battle, as well as the later Assault on Broken Shore, raged on.