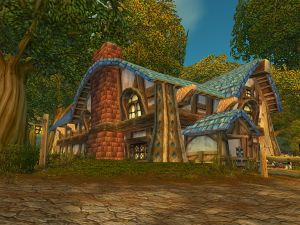 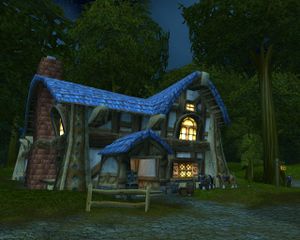 Lion's Pride Inn, aka Goldshire Inn,[1] is the main inn of the town of Goldshire, located in Elwynn Forest. According to Innkeeper Farley, the inn's motto is "Rest and relaxation for the tired and cold."[2] The inn has been run by the Farley family for years since the time of King Llane Wrynn, and they take great effort to run an above-board business.[3]

It is known for the frequent duels that take place just outside its entrance, and the just as frequent "exotic entertainment" that Goldshire is infamous for. It is quite possibly the busiest non-city inn of all the zones. Players sometimes can be found climbing up to the top of the roof and lighting a campfire for fun.

The Lion's Pride Inn is depicted close to its World of Warcraft incarnation. A war council of the Stormwind army happens here, led by King Llane.