The Ironforge Bank is located near the main entrance on the other side of a bridge which leads to the Auction House in The Commons. The guild bank in Ironforge can be found to either the left or the right, opposite of the bankers.

The Stormwind Counting House is a building with Roman-style columns and stone steps and is located in the southwest corner of the Trade District, opposite the Auction House, facing the fountain. Guild bank access is available in a smaller room at the rear of the main room.

The Royal Bank of Stormwind is located in the Dwarven District, just north of the fountain, opposite the Auction House. The facade and interior layout (including guild bank access) are similar to that of the Stormwind Counting House.

The Exodar bank is located in the Seat of the Naaru between the entrances to The Crystal Hall and The Vault of Lights on the west side. The guild banks are inside, on the right of the bankers.

Paymaster Lendry is located on the second floor inside the Foothold Citadel on Theramore Isle (phased area before destruction). A chest which accesses the guild bank sits on the floor beside his desk.

Mary Oxworth provides you access to your bank whilst you are in Gilneas. 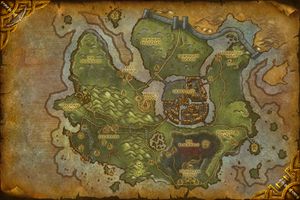 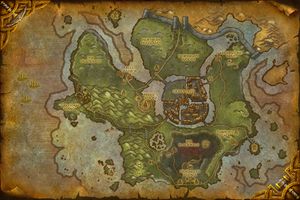 The bank is on the south-eastern side of the Lower Rise. (Go all the way down the ramp to the bottom of the flight tower, and go straight out the door.) The bank is tucked back behind some other tents. The mailbox is to the right of the door. The guild bank is a large totem in front of the bank entrance.

The first building straight in front of you as you walk into Orgrimmar, in front of the flight tower. The easily accessible roof is a common place to meet for trades or enchants. The main mailbox is to the right of the bank's door. The guild bank is a large dome shaped vault door on the floor behind the left and right bankers.

Other locations with bankers:

The tower in the center core of Undercity, surrounded by a ring of green goo. Go down either of the ramps from the top balcony. The guild vaults are chained skulls on the four corners of the bank level, flanking the four banker's windows.

There are two banks in Silvermoon City. The first is in the southern most part of The Bazaar, the other in the northmost part on the eastern side of The Royal Exchange.

Whilst in The Lost Isles and Kezan,

Gobber provides you with banking services, whose location changes as you progress through the quests. After picking him up during the quest 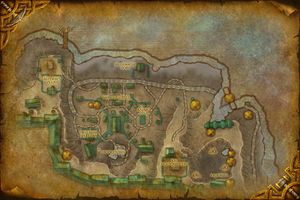 he will follow you up to leaving Kezan for The Lost Isles.

In The Lost Isles,

Gobber provides you with banking services. He can be found as the quests phase the terrain at Shipwreck Shore,[28.5, 76.5] 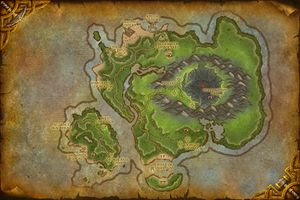 The bank in Ratchet is two goblins in open windows as in Booty Bay, next to the blacksmith's shop, facing the dock to the Maiden's Fancy, the boat to Booty Bay.

A dome-like building to the left of the exit opposite the one nearest the flight master.

Far south on the docks, on the side of the horseshoe farthest from where the Maiden's Fancy lands, two open windows as in Ratchet. One of the two mailboxes is nearby as well, as well as guild banks near the bank and the auctioneer.

A goblin standing next to a treasure chest in the back-right of the large building with the telescope on top. There is a guild vault in the back-left corner of the same building.

The bank is a set of stairs leading down into the ground, to the left as you come in the entrance nearest the flight path then across the bridge. Guild banks are the two odd-looking devices on either side of the room, each about as large as a goblin.

Shattrath City is divided into two factions: Aldor and Scryers. Both banks are located on the top level of the Terrace of Light, with stairs inside providing access to the Lower City. These banks are next to their corresponding faction's base, and are opposite each other. The guild vaults are set into the back of the alcoves on either side of the room where the arcane guardians used to stand for both factions.

Aldor bank is located in the northwest quadrant of the Terrace of Light.

Scryer bank is located in the southeast quadrant of the Terrace of Light.

Also referred to as the Horde bank, this bank is located between the Magus Commerce Exchange and the Sunreaver's Sanctuary. The guild vaults are located on the side walls inside the bank.

Also referred to as the Alliance bank, this bank is located between the Violet Hold and the Silver Enclave. The guild vaults are located on the side walls inside the bank.

A bank is located in Cantrips & Crows in the Underbelly. The banker is Binzik Goldbook, and a guild vault is next to him.