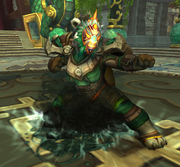 Liu Flameheart is a Priestess of the Jade Serpent.[1] Apparently,[2] one duty she performs is to train the Serpent Trainers, newer members of the order alongside their young Tamed Serpents, inside the inner courtyard of the temple.

Since she was a cub, the priestess Liu Flameheart has studied the cycle of rebirth for the Jade Serpent, Yu'lon. When the Sha of Doubt attacked, Liu was the first to resist, but she was also the first to succumb to corruption. Now she is consumed with uncertainty, fearing she may not have the strength to ensure Yu'lon's rebirth.

When Liu Flameheart reaches 70% remaining health, she channels the essence of the Jade Serpent to aid her in battle. Each of her attacks now has an additional effect.

When Liu Flameheart reaches 30% remaining health, she enters a trance, making herself invulnerable and summoning the spirit of Yu'lon to defend her in battle.

It's like the Ragnaros encounter. Just the wave of fire part. Dodge patches of fire on the ground when Yu'lon comes out.

Temple of the Jade Serpent (Questing)

Temple of the Jade Serpent (Dungeon)

Intro
Your forces are weak!

Aggro
The heart of the Great Serpent will not fall into your hands!

Phase 3
The cycle must continue, the Jade Serpent must be reborn!

Death
Yu'lon yells: Be free of doubt, priestess...
Liu Flameheart yells: The haze has been lifted from my eyes... forgive me for doubting you...