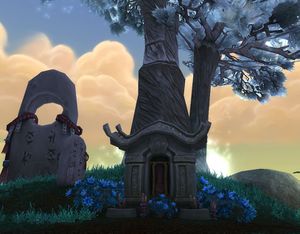 The shrine of Liu Lang and the tree that resulted from it.

Liu Lang's Final Rest marks the resting place of Liu Lang, the first pandaren explorer, in the Wood of Staves on the Wandering Isle. This is where Liu Lang planted his umbrella after saying farewell to his old friend, Shen-zin Su, upon whose back the Isle sits. He likely traveled to that particular spot because it also happens to be the closest point of the land where one can be near and see the head of Shen-zin Su.

"Goodnight, Shen-zin Su. Do not mourn, old friend. I sleep, and when I awaken, my next great journey begins." -Liu Lang

This location marks the final resting place of Liu Lang, the first pandaren explorer. Weary from a lifetime of travels, he rested under the shade of his trusted bamboo umbrella and drifted to what lies beyond.

According to legend, the unusual tree growing in this spot sprouted from that very umbrella, and his spirit has merged with the lands on Shen-zin Su's back.

In the generations that followed, many of the island's elders have followed, each planting his or her staff in the ground to create the "Wood of Staves."