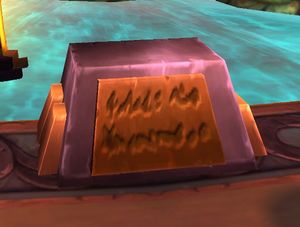 Liu Lang, The First Explorer is a plaque in front of the statue of Liu Lang in the Temple of the Five Dawns.

"Every horizon is a treasure chest; Every blank map a story waiting to be told."
- Liu Lang

The first pandaren explorer, Liu Lang disembarked from the mainland on the back of the great turtle Shen-zin Su. His discoveries proved that the rest of the world had survived the Sundering.

He would return to Pandaria every five years, gathering more wanderers and explorers with each visit, until his death at the age of 122. The turtle Shen-zin Su has not returned to Pandaria since.