Use Two-Shoed Lou's Old House at the back of the Jangolode Mine in Westfall.

Listen, I really shouldn't be talkin' to you, but I owe Horatio a favor or two. I don't really know nothin' about what happened to the Furlbrows, but I might be able to point you in the right direction.

<Lou hands you a large crate.>

That crate used to be my home before I struck it rich. Now I'm livin' the life every hobo dreams of!

Right, so you take that there livin' crate and head to the Jangolode Mine, southwest of here. Head to the back of the mine and once there, hide in the crate.

Be careful with my old house. I plan to hand that off to my kids when they move out.

<Lou puts his hands to his ears and starts talking loudly.>

I got one more bit of information for you and then we're done! 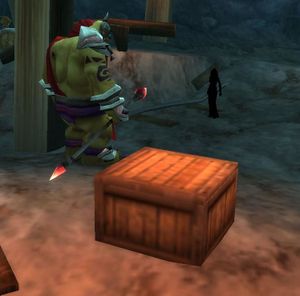 [11] "I TAKE Candle!" from McHannigan, standing next to Lou. Kill kobolds to get to the back of the cave.

Glubtok <The Foreman> spawns, as does a Shadowy Figure walking toward him: