"Pop quiz! You've got a bomb attached to your soul. What do you do?"
—Riley Sizzleswitch[1] 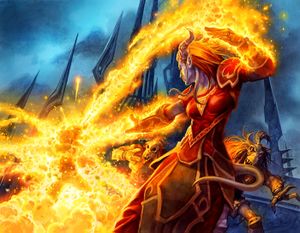 Each tick of Living Bomb's damage over time is capable of achieving a crit.

Living Bomb's explosion is only triggered when the spell reaches its full duration; dispelling the debuff will not cause it to explode.

The spell's explosion is capable of breaking

In Mists of Pandaria, the "mage bomb" category was expanded as a gameplay concept by the addition of

[Frost Bomb], which along with Living Bomb were made level 75 talents available to all specializations to provide more variety to mages' casting rotations. Nether Tempest is the mid-range of the three, best used against 3-6 targets with powerful direct damage and a random target splash effect. (Living Bomb, conversely, is more powerful against 1-2 targets, while Frost Bomb is better against 7 or more targets.)

While the mage bombs were highly successful in their task of changing the mage style of gameplay, they brought with them the opportunity to "multidot" (placing the effect on multiple targets simultaneously). Extensive tracking of DoT effects across multiple targets was not made for the intended style of mage gameplay. Because of this, the mage bomb talents are planned to be reworked into a single, spec-specific talent for Warlords of Draenor, of which the redesigned Living Bomb will be the Fire version.

Living Bomb is one of Kael'thas' Basic Abilities in Heroes of the Storm.