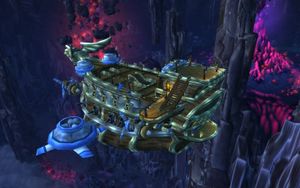 Llane's Oath is an Alliance gunship named after King Llane and patrolling above Lorthuna's Gate in Deepholm. The crew was infiltrated by the Twilight's Hammer before their arrival, and are responsible for the destruction of the Horde gunship Storm's Fury by tricking the crew into ambushing it. Presumably once the cult was ready, the gunship's rations were laced with a virulent poison before a dinner meal that quickly killed the entire crew except for First Mate Moody, who had missed dinner due to sleeping through it. The ship was then hijacked by the cult. Moody was soon after mortally wounded and apparently left to die, but has nevertheless been trying to keep the vessel from crashing into the rocks, while Stormcaller Mylra of the Earthen Ring has been investigating how the Twilight's Hammer gained control of the ship.

The vessel likely crashed into the rocks of Deepholm after Moody succumbed to his fatal wound.

The following quests take place on the gunship: