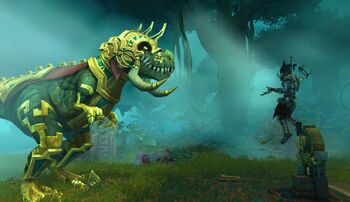 The Loa of Kings, Rezan, confronting Bwonsamdi, the Loa of Death

Loa is the name given by trolls to the beings they worship, such as the Wild Gods,[1][2] beings such as Kith'ix or G'huun, or spirits like wisps.[3] Countless loa exist, most weak, but some very powerful. Most are shapeless, whereas others have animal or creature forms.[4] Powerful, enlightened Zandalari can become loa upon their death - or so it is believed.[4]

Early troll tribes, though varying wildly in customs and traditions, all shared a common religion: the worship and reverence for the Wild Gods. The mountain range of Zandalar in southern Kalimdor was home to many loa, and was thus treated as being sacred.[1] Troll priests are devoted to only one loa per troll, while troll druids use the powers of several loa at once. This is something the loa do not like, as they prefer to be worshiped one at a time.[5] Shadow hunters commune with multiple loa as well, and the loa can even channel themselves through the shadow hunters when they use their ceremonial rush'kah masks.[6]

The loa can grant wondrous boons or inflict terrible punishments to trolls. Tales abound in troll culture, of those blessed by the loa with extraordinary regenerative abilities, strengthening their already powerful, natural regeneration.[7] The tale of Vula'jin the Void speaks of how he regrew almost his entire body after standing in a pool of shadowflame. But just as the loa can bless, they can also curse; troll children are taught legends of those cursed by the loa, such as Gri'lek, unable to heal even flesh wounds, to instill the proper respect for their patron spirits.[3]

Zandalari (as well as Darkspear)[8] families often worship their own family loa, cities usually have their own civic deities, and the greatest loa are worshiped by the nation as a whole. Powerful, enlightened Zandalari can become loa upon their death - or so it is believed.[4] An example of such a case is Zanza the Restless.[citation needed]  Different troll tribes may call upon different sets of loa.[9]

Troll druids visiting the Moonglade have been overheard calling the wisps who reside there loa, just as they refer to Goldrinn, Aviana, and the other returned Ancients as loa. Night elves and tauren have tried to counsel these trolls on "correct" druidic nomenclature, but the trolls thus far have been stuck in their ways.[3] The loa were later confirmed to be the same type of being as the Ancient Guardians.[1]

After Vol'jin was mortally wounded during the battle at the Broken Shore, he thought that the loa spirits spoke to him, claiming that the death will come soon. They also whispered the name Sylvanas Windrunner. Vol'jin, thus, named her Warchief of the Horde with his last breath.[10] However, during the Fourth War, the spirit of Vol'jin was summoned by Talanji, Master Gadrin, and Spiritwalker Ebonhorn, and Vol'jin revealed that it was not the loa spirits who told him to name Sylvanas Warchief but something far more powerful.[11] He could not tell who the voices belonged to, the memory being denied by some shadows.[12]

Some jungle trolls of the Darkspear tribe consider bird spirits to be weak, capricious, undeserving of their worship, and best left to the Amani.[13]

Loa gain in strength and power the more worshipers, offerings, idols and sacrifices they receive.[14] Carrying the symbol of a loa can help strengthen them.[15] Bwonsamdi also grows in power with every soul under his care.[16]

Servitors of the loa

All trolls worship a pantheon of primal forces; a sacred animal represents each aspect of the pantheon.[37]

The trolls draw power for their voodoo magics by performing rituals and invoking the Primal Gods, Old Gods,[38] forest spirits, and ancestral spirits: their Loa spirits and gods.

Loa spirits are more powerful than the elementals, but not as powerful as gods.[39] Supposedly, these spirits are mighty entities that grant the faithful extraordinary powers. By calling upon these voodoo spirits, the shadow hunter gains special blessings with which he can combat darkness and help those in need. The abilities granted vary according to the Loa the shadow hunter calls upon.[40] Almost any being who has died and transcended death can be worshiped as a loa, including Forsaken shadow ascendants.

The shadow hunters' faith and communion with the Loa gods grant them shadow and healing magic, and other abilities. Shadow Hunters learn magic that hinders enemies and aids allies, gaining a unique mix of spells that delve into the more occult aspects of the Loa.

The trolls of Zul'Aman worship primal beings they call the Forest Gods.[41]

There is contradicting information regarding the deaths of certain loa. Notably, the House of the Lost Loa seems to consider many loa as "lost", gone, or dead, despite some having been shown to return or maintain influence in some form after their death.

It was, however, confirmed that the lost loa are not permanently gone and that they could return.[25]

The following beings were never called "loa" but may share similarities with them and thus may or may not be loa.