Loania is the adopted human daughter of Voldana and twin sister of Lieren. Together with her twin sister, they faced the horrors of Darkshire and Karazhan to put their parents' souls to rest. 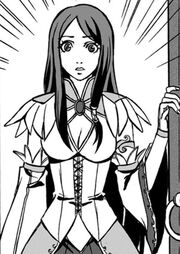 Lieren was raised as the adopted daughter of Voldana, one of the High elves of Quel'Danil Lodge, and was taught archery by Voldana, becoming a quick and highly accurate marksman. One evening when Voldana's old friend Kardan, a Wildhammer dwarf from Aerie Peak was visiting them, Lieren answered a knock at the door. She was shocked to find their male neighbor Ravic had in tow an identical teenage girl, but dressed in Wildhammer clothes, named Lieren. Lieren had lately developed an obsession with uncovering her past. Curiosity caused her to follow Kardan, her adopted parent, from Aerie Peak on his late-night excursion to visit Voldana.

With the truth out in the open, it is with a heavy heart that their adopted parents revealed that she and Lieren are the daughters of a human paladin named Dougan, an old friend they fought beside in the Second War, whom Kardan and Voldana accompanied on his mission to rescue villagers from the cursed tower of Karazhan. Unfortunately, brave hearts and noble intentions were not enough to defeat the evil from with in and they were forced to retreat. Dougan was killed in the process and was left behind. Feeling guilty that they hadn't gone back for their friend, Kardan and Voldana returned to Grand Hamlet and delivered the sad news to Dougan’s wife Adena. Yet so immense was her grief that her mind snapped and she became unfit to raise her twin baby girls. After some time spent with Adena, it became clear that she might not ever recover. And so, after arranging for Adena to be cared for by a healer, Voldanna and Kardan decided to honor their friend by raising the twin girls as their own.

While Lieren and Loania shared little in common aside from their appearance, they both insisted on seeing their mother. Voldana and Kardan accompanied the twins to the location of a house where their mother lived. However upon arrival of their old home, now called Darkshire, the twins found the house to be empty. While there, they were attacked by ghouls but thanks to arrival of Watcher Dodds and his soldiers, they were rescued. Eventually they learned from Commander Althea Ebonlocke that their mother was dead. After the loss of the good paladin and neighbor, Adena had committed suicide not long after Kardan and Voldana had adopted the twins, and was then buried in Raven Hill Cemetery. On the way to the cemetery with a Night Watch escort, it was discovered that Adena had been reborn as one of the undead, and was headed with other undead to attack Darkshire. The girls set off on the grisly task of freeing their mother from the rotten prison of flesh by decapitating her.

It was then that with their mother’s soul finally laid to rest that Lieren and Loania swore an oath on her grave, now in Hinterlands, to go to Karazhan to free their father’s soul as they did their mother’s.[1]

A few years later, and the teenagers are now young women. Loania has become a mage, leaving behind the use of the bow. It is revealed that because the high elves of Quel'Danil Lodge no longer practice magic, Loania had to learn magic from a visiting human mage. Using her knowledge of magic, Loania used a spell to contact their father to see if he still lives. Dougan’s spirit warns them to stay away, yet Lieren is determined to free him. Without Kardan and Voldana's knowledge, Loania teleports herself and Lieren from Lieren's room in Aerie Peek to Karazhan in search of their father.

As the twins make their way through Karazhan, Loania, being a mage, starts seeing visions. The first was a vision of Medivh opening the dark portal to unleash the Horde into Azeroth. The second vision is of their father fighting the undead in the tower. Loania uses her vision to trace her father’s foot steps which leads her to Terestian Illhoof, their father’s murderer. The twins defeat him in battle but Loania is left injured. Lieren wants to get Loania to safety first before she rescues her father. They meet with the spirit of Nielas Aran who ensorcells Lieren in an attempt to kill her and trap her spirit in Karazhan forever. Loania uses a spell to call out to her father once more and Dougan’s spirit arrives just in time to save Lieren’s life, intimidating Aran into submission. Dougan tells Lieren that it is impossible for his spirit to leave Karazhan and that he has made peace with that.

As danger approaches, Lieren and Loania need to teleport out of Karazhan, but Loania is so weak that Lieren offers her access to her lifeforce to beat the the tower's pull. Dougan’s spirit holds off the horrors of Karazhan while Loania teleports themselves out of danger and make their escape. As Lieren could only use her lifeforce to power the spell rather than magic, the strain of the teleportation caused her hair to become streaked with white, which she uses as a reminder that she can’t win every battle.

Although they failed to free their father’s spirit, the twins take comfort in knowing that his spirit remains unbroken, just like theirs.[2]