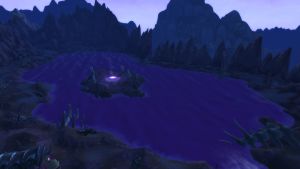 is a lake on western Twilight Highlands, on the border with the Wetlands. A waterfall sends the water to the Verrall River, which empties into the Forbidding Sea through the Verrall Delta.

In the past, the lake had been pristine, and was ruled over by the water spirit, Countess Verrall.[1] She held a shaky truce with the fire elementals led by Lord Cannon to the south.[2]

Eventually, the area of Loch Verrall was overrun by the Twilight's Hammer cult streaming out of the Twilight Citadel, located just to the south. The lake was polluted,[1] and is now filled with large dragon bones. More red dragons are killed or left to die by the cultists at the lakeside. The water elementals within the lake have been enslaved and are now controlled by the cultists. If defeated, these elementals are freed from the binding magic and attack a nearby Twilight's Hammer member. A water elemental ascendant named Edemantus, who is a quest objective for

[85] Portal Overload, can be found on a small isle in the middle, and so is the Corpse of Forgemaster Finlay.

The schools of highland guppies can often be found here.